Can you Make Money with Online Gaming?

It would be the dream of any gamer, to be able to take their hobby and make it into a career. If not a career, at least be able to monetize it somehow.

Many gamers are interested in coding, digital music, or story-telling. These are all viable options to get into the gaming industry. However, it is a competitive area, and you will need to be highly skilled.

What about making money from online gaming in other ways? Could playing online itself create a revenue stream, or could you involve the activity in another fashion.

Here are a few ideas that might work if you wanted to make money from some form of online gaming. 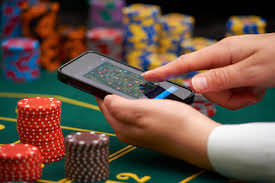 Millions of apps are downloaded each day. There are many great online games for Android, and some are classics such as PUBG.

Aside from the standard games that you play solo, or against other people, there is a newer type of game on the scene now. Often referred to as play-to-earn, these games offer the chance to make money.

Previously, many of these games were dubious, just to be clear. Individuals have worked their way towards cash rewards only to find the rules change at the last moment. This effectively means the player has wasted hours gaming.

Now though, there are several titles that deal with crypto and NFTs. These games genuinely give players money as rewards, although they are in the form of cryptocurrencies or NFTs.

The problem with play-to-earn games is that the titles can sometimes be a little boring, and it can feel like you are grinding out those gaming coins.

If you prefer games such as poker or blackjack, visiting an online casino could be the answer. Players such as Energy Casino, MGM, and Paddy Power, all have online casinos that let individuals have the chance to win money.

Of course, it should be kept in mind that this is gambling, and there is no promise that you would make any money at all.

One way to tip the odds in your favor might be to use the casino’s own money. If you seek out sites that offer sign-up bonuses or match your initial deposit, you may have a better chance of turning a profit.

Sticking to this tactic may maximize your overall win-loss balance. Nevertheless, it is not a long-term strategy.

You don’t have to always play games to make money. You could write about them. Blogging is a realistic way to make an income, and writing about your favorite games will never be a chore.

Making any income from blogging will take time. And, it will take plenty of effort. This isn’t a get-rich-scheme, but it could turn out to be something of a full-time role once you get to the point of monetizing the blog.

Streaming, much like blogging, is a popular movement in the gaming world. To make money this way will also take some time.

You will need to be very active on social media, engage with people who comment on your work and have a certain level of charisma.

Strangely, what you don’t necessarily need is high levels of gaming talent. If you are funny, engaging, and genuinely interested in the games you stream, then you can still develop a following.

To make money from advertising, however, will require a lot of views of your videos. A viewing estimate for earning $1000 is in the region of 500,000 video views. That means you need to reach out and get a large audience or make content that goes viral.

If however, you are good at playing games, and by that, exceptionally good is meant, you could enter some esports tournaments.

Since Nintendo started the trend for regular video games events, they have grown to exceptional levels, with huge prizes.

The Guinness World Records reported that a 16-year-old boy won $3 million by playing Fortnite in one competition. The International event for Dota2 has a prize pot of over $40 million.

There is serious money to be made, and it could become a career if you can get sponsored or picked to be in an esports team.

Dropshipping is still a viable option in 2022 for making money online. And not everyone downloads their gaming content, some people still prefer to have a tangible product in their hands.

You could set up a dropshipping business that deals in online games. The best thing about dropshipping, is you don’t need to ever hold any stock yourself, although you probably want to try out a few of the games you are selling. Just don’t use all the profits up.

Write your own game

The days of the solo-coder are largely over, but there are still some great independent games being made. Online gaming doesn’t need to refer to League of Legends or Call of Duty, it means any game that is played through the internet. Therefore, they can be quite simple to code.

One perfect example of making a game and then seeing a handsome reward is Wordle. The New York Times purchased Wordle for a seven-figure sum not so long ago. The game was originally written by one man as a gift for his partner, as she liked word games.

There are plenty of options for making money from online gaming. You could try playing online bingo, or you could look for journalistic work for a gaming column.

You could design your own games, sell other people’s through drop shipping, or just visit an online casino. One of the things you need to comprehend when choosing a safe online casino is making sure it is reputable. You also need to know to stick to whatever limits you have set yourself.

If you don’t like the idea of gambling, then try streaming yourself, or combine that with blogging. If you truthfully want to make some cash from online gaming, then there are ways.