Gadgets that Got the Biggest Buzz at the Consumer Electronics Show

Gadget freaks eagerly wait for Consumer Electronics Show held every year in Las Vegas. The show displays some of the upcoming gadgets of the year. Following the trend of past few years, tablets were the hottest gadgets this year too with around 75 being displayed at the show. Besides tablets, a large number of smartphones, laptops, HDTVs, cars, peripherals and cameras were put up on the show. However, some gadgets got more attention than others and were able to create the buzz among gadget fans. We’ll list such gadgets which got maximum attention this year. 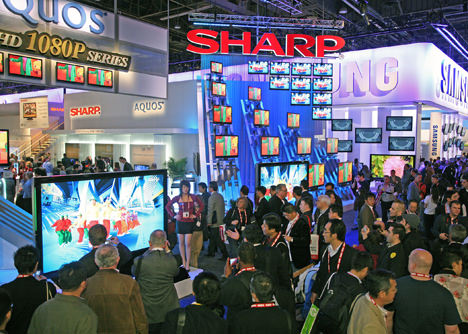 Motorola Xoom is the first tablet that would run on Google’s Android 3.0 Honeycomb OS. XOOM will have flash support that would improve video viewing. It supports 1280 x 800-resolution on its 10.1-inch display, while being powered by Nvidia Tegra dual core processor. It has a camera in front as well as the rear. The tablet enables 3G access that can be further upgraded to 4G. It has a 5 megapixel camera and can record 720p videos. The tablet is available from Verizon, since Q1 2011.

Motorola Atrix 4G was able to stand apart from the smartphone crowd thanks to its unique features. Android 2.2 based Atrix is powered by Tegra2 and supports HTML5. It has the 4-inch qHD (quarter of full HD) display that gives the resolution of 960×540 will help you view any HD video. It has a fingerprint reader, 1GB of RAM and 1939 mAH of battery. It features Webtop OS and an 11.6 inch laptop dock that turns it to a small laptop.

Samsung 9 series include premium, lightweight 13.3 inch laptops. The laptops that weigh only 2.89 pounds and are 0.68 inches thin will be competing with Apple’s MacBook Air. Samsung will introduce SuperBright display with 400- nit brightness. It’s powered by Intel Core i5 2537M processor and has 128GB SSD.

Sony Bloggie 3D is loaded with two lenses and two image sensors. The 3D viewing on 2.4″ LCD doesn’t require 3D glasses. It offers full HD with 1920 x1080-resolution and 8GB of storage. It is the most affordable 3D camera in the market.

Mitsubishi 92-inch 3D TV is the largest 3D TV in the market. It is based on DLP rear-projection technology from Texas Instruments. It has Mitsubishi’s Unisen sound system, which projects 5.1 surround sound. However, with the price tag of around $6,000 not many will be able to afford it.

A product from by Tremont Electric, nPower PEG helps you generate electricity as you walk and move around. This electricity can be used to charge your iPod Nano or other such devices. The gadget is like a flashlight which shakes itself as you walk.

LG displayed world’s slimmest OLED TV, which is just 2.9 millimeters thick. It has a 31-inch screen with a full-HD 1920 x 1800 display with a staggering refresh rate of 600 Hz, which results in great picture quality.

Ludacris, an American rapper has launched his own line of headphones. The five headphone models displayed in CES promise to deliver deep bass without sacrificing clarity.

So, it seems like Android, smartphone and tablets will be the hottest gadgets in 2011. Major TV brands didn’t display a line-up of smart TVs this year, which means we might have to wait until 2012 for them. Furthermore, Android will be used on more tablets and smart TVs.

Author Bio:- Amanda Kidd is a gadget freak and a blogger by profession. She is all into spy gadgets and she dreams of owning a learning robot in the near future.