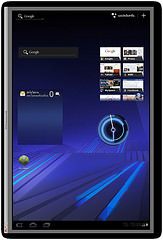 The world has come to a point where everyone uses some new forms of technology to communicate, stay updated and organize their lives. Some even utilize gadgets as personal assistants. Tablets are also included in this category and are definitely emerging and being developed quite rapidly. This is a sign that this year is going to be a techie year for this new form of computing.

In this revolving environment, android powered devices and especially tablets have a very important role to play. With the upcoming release of android tablet 3.0 and the support of Google, the android tablet will be more powerful than ever and for sure will shake the tablet market currently dominated by Apple’s IPad.

What is the buzz about the new android tablet? Will Android tablets challenge the iPad? These questions are not unusual. Let’s try to discuss them one by one.

>> Android tablets are basically tablet computers in one slab of any inch screen (usually 10 inch), with multi-touch functionality. They have the performance of a laptop but with more connectivity features, bringing you the Internet at your fingertips. They are very easy to use, with fast processors allowing you to perform your basic computing tasks without having to touch physical buttons (in most cases).

>> Tablets basically work as a personal pc just like your usual laptop. What makes them different with laptops is that they are handier, faster to boot, offer better battery performance and they are lightweight. We can safely call them a hybrid of smart phones and laptop. Tablets are getting famous due to the initial success of IPad and because they are cheaper than most laptops. In reality their price range falls between the price of a good smartphone and a laptop.

>> Last year if you’re looking for a tablet computer then the only real choice you had was the iPad,  but for many people it was expensive. This year you have more than one choice due to the release of a plethora of android tablets. Android has improved a lot since its first release and now with the release of Android 3.0 Apple has found a competent challenger.

>> Android tablets will soon have something to offer for everyone. For those young entrepreneurs, for students, for anyone who just want games or entertainment or for those people who just want to stay connected. An android tablet would definitely work for you. IPad was an innovative device and gave you a good impression of how a tablet works, which makes it undoubtedly a genius creation, but what we have for androids are also genius creations, and on top of that, they are developed from many highly trusted and prestigious companies who plan to venture in the tablet industry.

Android 3.0 tablets can definitely provide you with a unique experience of up to date tablet function. As we all know, Android OS has been targeted by a lot of manufacturers due to its success on smartphones, which is undoubtedly because of its open nature and support for low-cost ARM systems. For the new upgrades, expect a lot of UI improvements, functional enhancements and more apps! Not to mention the amazing GPS system which works online and offline, and many other new apps including fancy e-book apps, and 3D games.

Whatever your choice may be, improvement in technology is undeniable. Check out the android tablets if you’re up for a new and reliable tablet experience. Android tablet has definitely more to come this year!