10 Amazing Video Games That Can Boost Your Intelligence

Video games have remained popular across generations for years. According to We PC, in 2016 alone, 2.5 billion people played video games. And by the end of 2020, the sector is expected to reach a revenue of 90 billion US dollars.

As per the Entertainment Software Association, 65 percent of Americans can be classified as gamers. 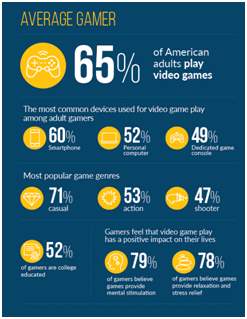 Despite it being so prevalent in the daily lives of many, few consider gaming to be a constructive activity. In fact, many parents try to limit the usage of video games. However, this is a misconception.

Research conducted by Digital Creativity Labs in 2017 revealed a positive correlation between children playing Call of Duty and a high level of intelligence. Therefore, if you choose the games carefully, they can end up boosting your intelligence.

Here are ten video games that can help make you smarter.

This strategy game is offered by Unlimited Gamez Mo – an online gaming platform that provides access to a wide variety of games for a minimal subscription fee.

In this multiplayer game, you have to simply be the first one to connect the four same-colored balls together in a vertical row. You must plan your moves ahead and also keep in mind the consequences of each move.

You can choose to play against the PC or challenge another gamer. The difficulty level of the game can also be increased when it becomes too easy.

While the gameplay is highly straightforward, the strategy required when playing it ends up boosting decision making and planning.

Starcraft is quite a popular strategy game. The game is lauded for its excellent plot and gameplay. It features a science fiction setting. The players assume the role of different alien species, where each of them fights to assert their dominance.

You can choose which alien specie you want to become. The type of fighting units and tactics available to you will vary accordingly.

How does a mere sci-fi real-time game help in improving intelligence?

Well, the game requires the effective use of resources. Here, you must learn how to build and sustain resources. This helps in improving brain flexibility and learning how to adapt to a changing environment via efficient problem-solving.

It is impossible to create a list of best games for boosting intelligence and not include the one which has been scientifically proven to help in improving the IQ of individuals.

Call of Duty is a popular first-person shooter game that helps in improving hand-eye coordination. In the video game, players are placed in different futuristic battlegrounds, whereby they must use advanced strategies and weapons to emerge as the winner.

An independent study conducted by the University of Rochester discovered that the game helps boost the vision while a 2009 study found the game to be responsible for improving the contrast sensitivity function of the brain.

In other words, the vivid and changing images help players in identifying subtle changes in image brightness. This can improve vision when driving at night.

Lumosity isn’t one game but a collection of various brain-training games. The platform is quite popular among the masses, with over 85 million subscribers.

It offers over 30 brain games, each of which helps improve different brain functions. For instance, some are tailored towards boosting short-term memory while other games help in progressing hand-eye coordination.

To make the games competitive, the platform allows players to track their scores and compare them with other users. All in all, the game gives the brain the exercise it needs to stay fit.

Considering the recent success of the Netflix series, the chances are that you have heard of, if not already, played Witcher.

The third installment of the game is just as intriguing and addictive as the other ones. Here, you assume the role of the protagonist, who is a monster hunter named as the Witcher. The storyline revolves around his struggle to find his daughter.

To do so, the player embarks on an adventure where you will have to complete various side quests along with fighting monsters, collecting weapons, and concocting potions.

The Witcher helps in improving intelligence by putting players in situations where they have to solve problems, make decisions, be quick with their movements, and efficiently manage their resources.

Unlike most of the other options on this list, this game feels like something educational in nature. From the get-go, it relies on your logical and mathematical skills.

Again, you must think ahead and plan your moves in advance. Numerous wrong moves can end up leading the player to end up with the wrong number.

Yes! You read it right. Minecraft can actually help improve your intelligence.

The game is already quite popular among players. This is an open-world experience that doesn’t rely on high-quality graphics to attract people. Instead, the fact that you can do anything in the game already makes the game highly addictive.

Here, players can build things, explore landscapes, and fight it out. Different modes are available, including creative, survival, and adventure.

The different modes each play a role in boosting different functions of the brain. While the survival mode helps in hand-eye coordination, the creative mode aid in resource management. Just like Lego, the game is used to help children understanding planning, construction, and spatial reasoning.

Super Mario is among the oldest games of Nintendo, and its popularity hasn’t wavered since then. Here, you assume the role of Mario, who is on his way to rescue Princess Peach. On his way, he explores a never-ending world, complete quests, and fight against the bad guys.

Super Mario is yet another game that has been backed by research to be advantageous for the brain.

As per a study conducted by the Charite University Medicine St. Hedwig-Krankenhaus and the Max Planck Institute for Human Development, those who play Super Mario 64 show additional gray matter in areas responsible for strategic planning, motor skills, spatial orientation, and memory formation.

Sudoku helps in increasing the neuroplasticity of the brain and is a complicated yet fun game to play, regardless of how young or old you are. The achieved neuroplasticity helps in improving spatial reasoning and understanding patterns, hence boosting IQ.

Sudoku is a number placement game in which you have to make sure that a given number is the answer from all directions. For example, from horizontally, vertically as well as diagonally, the sum of the numbers should equal 12.

The game is available both in physical form and online. The complexity can be varied according to the age of the player.

In over 90 countries, Fit Brains Trainer is among the top education app. The app consists of a plethora of games that are meant to stimulate both EQ and IQ of the players.

The good thing about the app is that it features customized sessions. Therefore, it identifies the needs of the player and offers games accordingly. This helps it in offering the right games required for improving the intelligence of the player.

Compared to other games on the list, this is must more educational in nature.

As you can see from the list, games don’t necessarily only have to be educational to be beneficial for the brain. Different genres have different advantages.

Make sure to try playing them all and see if they indeed help you. And do let us know below about your experience.

Andrea Bell is a blogger by choice. She loves to discover the world around her. She likes to share her discoveries, experiences and express herself through her blogs. You can find her on Twitter:@IM_AndreaBell