You may be interested to know that “Console Wars” is actually a technical term that was coined at the beginning of the “System Wars” between Video Game Marketers.  It has become more covert but in some senses more aggressive.  Console Wars have been running ever since Atari came out and was faced with fights with Arcade gamers.  Atari managed to pull through and ever since the 70’s when it cost $199 it was the king of consoles.  Now Consoles are still raging against each other for more sales, and exclusive rights to specific games!

We all have our favorite games consoles, the current most popular are the Wii, Xbox 360 and PlayStation 3.  Everyone has their own views on which are the best but what do the worldwide sales have to say about this?  Is there a country that prefers one console to another, and which is the overall winner?

The easiest way to gauge which is most popular is by looking at the sales figures.  But let’s look at the main gaming countries and sales industries around the world.  These include Japan, the USA and the United Kingdom by far the powerhouses for the gaming industry, and the most avid gamers around the world.

Here are the sales figures for Japan: 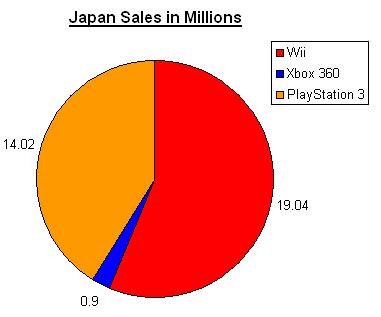 Now there are some obvious reasons why these figures are demonstrated like this.  Nintendo and Sony are at home in Japan, the Xbox 360 is the outsider built in the USA.  This brand is also relatively new, Microsoft may be a long running extremely well brand, but they are not known all that well for the games console industry, this will be demonstrated later on.

The Sales Figures for the UK: 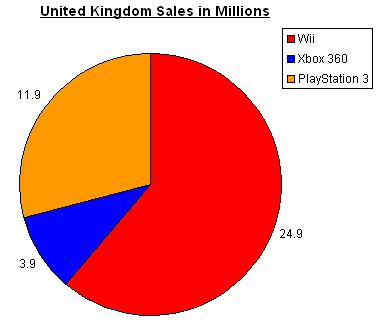 The UK demonstrates a similar value to Japan, with the Wii still dominating the market and the PlayStation 3 coming in clear second.  The Xbox sales have increased dramatically in the UK but are still heavily overshadowed by the two main rivals.

Here are the USA sales: 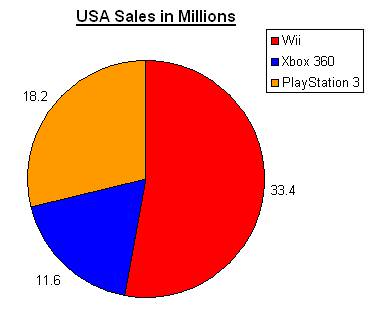 Still the Wii is triumphant, and in a massive way.  The Xbox has managed to claw back a little more ground, but this is after all, where Microsoft first launched it and where it was best known.  However it is still 7 million sales short of the PS3.

Overall this is the worldwide sales of the consoles: 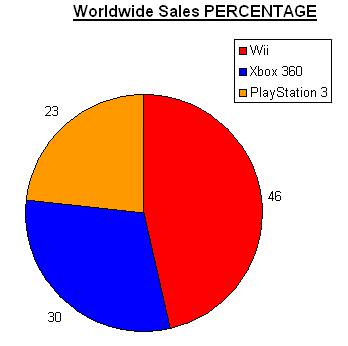 Now bearing in mind that in the top three gaming industries around the world, the Xbox didn’t do all that well, however in worldwide sales figures it outranks the PS3.  Maybe we need to take into account some other countries.  Something that hasn’t been factored in is the price of these consoles.  The PS3 is still the most expensive of all the consoles.  In other countries it could be more difficult to purchase one, where the Xbox 360 is one of the cheaper, but still offers just as good gaming experience, some argue better.

However why does the Xbox 360 do so badly in these More Economically Developed countries?  Simply put in Japan, there is a different gaming experience to be had on the home built consoles made by Nintendo and Sony.  These consoles provide more of an RPG and MMORPG (Multi Media Online Role Playing Game) experience, which Microsoft haven’t truly mastered yet (more shoot’em up style games).

It is obvious why the Wii performs so well across the globe and that’s purely for it’s target audience.  When the Wii was launched it was with a genius plan from Nintendo.  They decided to target everyone, from the age of 3 right the way up to 200 (if anyone could live that long).  This gave them a unique opportunity to sell to families, OAP’s and still hold interest with the Teenage generation.  What better way to beat the competition that to target an audience that has never truly been targeted before?