Nokia E7- What You are Missing?

Earlier last year on 14th of September 2010, Nokia had announced 3 of its upcoming smartphones to add upto the family of Cseries and Eseries mobiles, which are E7, C7 and C6-01, all loaded with the new gen Symbian^3 OS. Two of the less anticipated phones were released later same year, however, the Nokia E7, which is most anticipated of three has no signs of coming out of veil. Nokia E7 is going to be the 4th Symbian^3 phone and sits right next to N8 as it totally matches up to its glory.

Sleek looking Nokia E7 is a pure business gadget and where its compact and great looking 4 inches touchscreen and QWERTY keypad enhances its performance, the Clearblack technology embeded into it improves the out door visibility of display and puts it ahead of many other smartphones. It doesn’t end here, the list of features keep adding up, however, it would be an unjust to not mention the integration of Miscrosoft Exchange Activesync support system. While there are no signs on the cost of this set, its speculated that Nokia E7 Price would be around $680 USD. We shall cut short to chase and put some light on extensive list of specifications of E7. 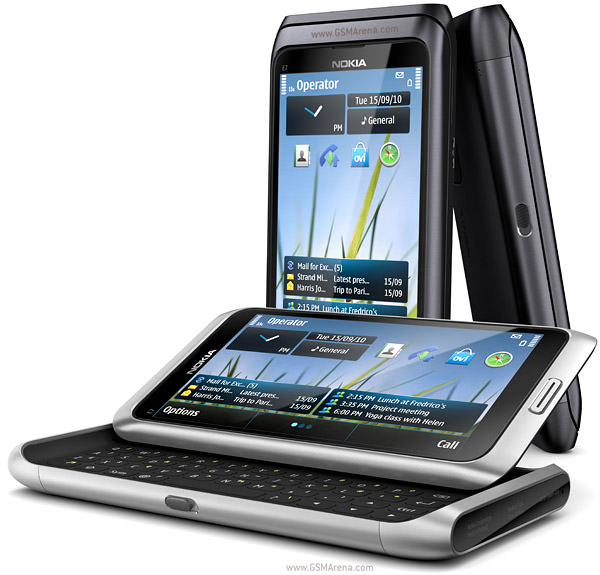 Although the release date is not yet announced by nokia mobiles, but phone has showed up on amazon stores and it can be added into wish list of pre booked in USA and UK. As far as the phone goes, it is safe to assume that it shall be a nice entry into the smartphones market. I would also like to mention the upcoming MC conference and expected announcements of Motorola Atrix, which is a dual processor smartphone and Nokia N9, which is supported with Meego, now with the invention of these higher end phones, E7 would only manage to sustain if Nokia rushes and pumps it out in the market.