NBA2k18: Strategies to build your MyPlayer without buying VC. 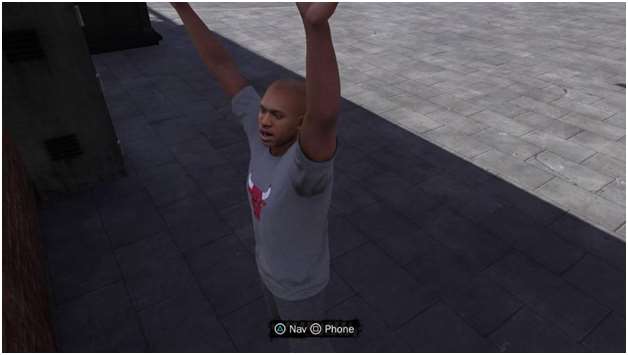 One hot topic being discussed among NBA 2k18 fans is Virtual Currency or simply call it as VC.

MyCareer mode has always been enthralling for NBA 2k fans. Now it has been replaced with open environment called MyNeighbour, where you are free to do hell lot of activity, which will make your time fly. Though the conceptual idea behind it is quite interesting, there are some technical issues which needed to be looked upon.

But VC has been the source of irritation of gamers. They are not happy with the modus operandi behind VC. Playing the game, investing time on it is the one strenuous task to climb the ladders of the game. But if you can invest your money than there is short way to the top.

To ascertain the game better, I have been investing mind time to find all the possible ways to earn VC without spending any penny.  To start with I had a character with bottom line 60.

Here is a chart for you which gives how much VC you will be paid for task you do. Can serve as quick reference for those who are thinking of making VC treasure without any money investment. 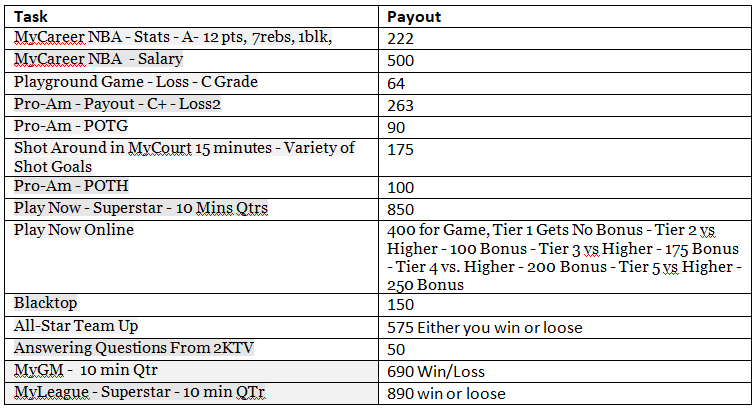 The most profitable deal to earn VC is MyCareer NBA game. Per game you can earn you can earn 1000 VC. Me being a novice here earned enough without having proper skill set. Surely you will surpass me.

If you get hold  of few NBA games then you can create a pile of VC which can be put to upgrade your player, also earning badges will also be a add on.

Playing NBA regularly will boost your skills especially your signature skills. Important aspect of the game is reviewing and analyzing your skillsets and your progress after each game, a feature which was highly desirable and needs applaud for all the team members who worked on the game.

In midst of variety of gamers there are some who don’t want to initiate MyPlayer’s NBA career without sharpening their player’s skill by building their character. Then there are variety of modes which can earn you some decent amount of VC to develop your player.

Importance of MyLeague and MyGM

Besides being the best and a complete mode MyLeague is one of the most prompt way to earn VC. MyLeague game played in superstar level having quarter of 10 min will earn you 890 VC per game. Think about this, you are on a journey different from your MyCareer mode where you have Player lock style and along with this you earn VC as well.

Similarly, in MyGm mode you will get 690 VC per game, a game setup that mimics MyLeague. Though comparing to MyLeague you get less in hand but still there is something for the task.

Surprising enough a regular Play Now game earned 850 VC which is quite decent. Though Play Now Online option could have been a good way but due to some glitch it hasn’t been giving people any VC after their win. Until it get mended, I would not include it in my VC earning ways. Other given options will give you a better prospects to earn VC without entering The Neighbourhood.

If you are seriously considering earning VC  but without any cash then you must have a plan of attack. I have summed up three strategies to build up your VC mound.

This is the guy or girl who has not more than a 2 hours a session to play. Then being a human of common nature they don’t want to be ridiculed by a gamer whose player is rated 80 or above when you yourself is a character of around 60.

So presented here is strategy to be perfectionist who is short on time.

This 2 hours of time can take you to around 2000 VC (in most cases). Repeating the same process for nearly 7-8 days, you will earn a decent amount of VC which you can use to upgrade Myplayer bring significant attribute to your player. You can continue with the process as long as you want but this time you won’t have to start again.

Stick to your neighborhood

If you are not into any other mode and you are not in the mood to try the same then TheNeighborhood is the perfect ground for you to shape your skills. If you are short on time or you don’t want to reveal your menial ranked players to the audience then you must play NBA games before heading on to ProAm or Playground.

Here a plan to approach this

Experience it all way might be best for you if you enjoy playing multiple modes in the game. Having played all the VC earning modes in the game I found out that All Star Team Up is my least favourite.

In my game playing for three days involving 8 hours in total, I earned nearly 5000 VC. I enjoyed the game a lot and also had appreciation for the game in my heart. I upgraded my player from 60 to 64. Alternatively, you can also use our nba 2k18 vc glitch to collect good sum of vc without spending a penny. Moreover, nba 2k keeps posting nba 2k18 locker codes on their twitter handle so, you can also grab your hands on some of them to get good no. Of VC’s for free.

Had I taken the best VC earning modes I could have upgraded much swiftly.  But I really enjoyed the journey specially the grinding that takes to build your character. If I were you I would take this path and along with enjoying the game I would master it.