Microsoft is up for another wave of surprise. It is not yet out, but we are almost near it. The launch of Microsoft Surface with Windows 8 Pro is just around the corner. Microsoft has learned quite many lessons from the Windows RT version and so this device is expected to be as flexible as users expect it to be. Their touch cover wasn’t as strong a selling point because of the buggy OS. So, what was intended to set standards of advanced technology became a lesson learnt the hard way for Microsoft. However, they are now back with a Surface tablet with Windows 8 Pro. 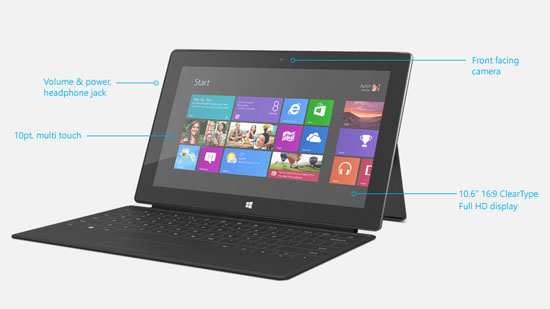 It will be available in two models, a 64 GB model and a 128 GB model. The 64GB model will cost you around $899 and the latter, $999. Unlike Surface with Windows RT, this device will let you use desktop applications, which will be a big reason for people to buy it. It measures 10.81×6.81×0.53 inches and weighs around 2 lbs. The bezel isn’t too thin and you can see gloss on it with the Windows logo at the center of the bottom bezel. Microsoft still relies on its touch cover innovation by providing a touch cover keyboard for the device. As the touch cover is a little flexible, the keys tend to bounce back while typing and so you might not have a good typing experience if you are a heavy typist.

It packs with it a 4GB RAM and a 3rd Generation Intel Core i5 processor with HD Graphics 4000. Surface with Windows 8 Pro is powered by a 42W-h battery and it ships with a 5 w-h additional USB for charging. As it runs the full desktop version, you can easily manage your favorite applications and other programs without any difficulty. It has two 720p HD cameras in the rear and front. Microsoft Surface Windows 8 Pro supports 802.11 a/b/g/n Wi-Fi networks and Bluetooth 4.0. It comes in dark titanium color like Surface with windows RT.

It comes with a pen for input, which was not included with Surface with RT and users had to buy it for an extra $100. The display is covered with scratch resistant glass and it has ambient light sensor. The price is the major drawback of Surface with Windows 8 Pro. Other 10-inch tablets aren’t as expensive as this and you can buy an Ultrabook with more capabilities rather than buying a 10-inch tablet for this price. However, there must be some tricky pricing strategy that Microsoft is following and that could be known only after the tablet is launched.

There has been no announcement about the launch date and we were just told that we can expect it any time in January. Given the specs, we have much to think about before the launch. The techies don’t see it as a good choice because there are better ones available for a cheaper price. It would be wise to resist the temptation to place a pre-order because it might be another disappointment in disguise.

Author Bio:- This is a guest post is brought to you by Samantha Kirk, a writer for Centurylink Internet. Samantha provides up to date content and information for high-speed internet, phone services, bundles and other Centurylink offers.