The latest smartphones are almost exponentially better than the generation before with a leap forward in available screen technologies and the usual doubling up of memory and storage resources. So looking at two of the latest top-flight phones will there be much difference for the buyer? We compared the HTC Droid DNA with the latest Samsung Galaxy S3 and although they compete well, they do have some features which will swing the average buyer one way or the other. 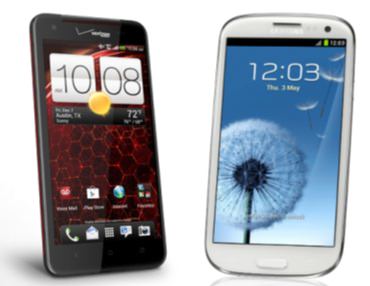 Show us the goods!

Let’s start with the most obvious feature – the display. Some incredible advances from Samsung have resulted in an unbelievable 1280 pixels on their latest screens which is amazingly overshadowed by the 1920 pixels of the DNA – as many as the average PC screen. The screens are AMOLED and LED technology respectively, which exhibit slightly different spectral outputs.

The greater resolution of the HTC is jaded by the fact that the extra power consumption chops the running time of the batteries considerably. The battery life is an important feature for many so the S3’s 22 hours of talk time compared to only 13 hours for the HTC will make a difference for many users. Start running videos in between calls and this could sink further as the DNA screen devours more juice. Cameras are very comparable, both boasting an 8Mpx rear and the front at 1.9Mpx for the S3 and a slightly better 2.1Mpx for the DNA. The Samsung edges it though with built-in image stabilization. Wireless specs are the same for both devices offering 3G/4G, Bluetooth 3, WiFi and identical Android 4.1 Ice Cream operating systems.

Cloud or local Storage – its one or the other!

Storage is an obvious focus for potential buyers with both phones offering a healthy 16Gb of storage. Here’s where the crunch comes. The Galaxy S3 has MicroSD sockets offering a 64GB removable memory capacity. The only way to get the HTC up to the same standard is to use cloud based storage services. This is a reliable way to keep your data – if you drop your phone in the dishwater, you will have to use data recovery or a similar service to recover your data – if you keep it in Google cloud you can avoid this as a replacement phone will simply pick up from where you left off. The downside is that it might cost too as the free storage amount is not that great.

The two phones offer almost identical CPU performance. The CPUs are within a spit of each other at 1.4/1.5MHz with the DNA just getting the edge. The extra screen resolution will no doubt be hampering the CPU to some extent too but that seems unnoticeable. The Samsung display is not as good as the HTC in plain white if the settings are not adjusted but is definitely more vivid in full color – Those with a preference for more natural colors might favor the DNA screen.

So which phone is best?

Overall, the differences boil down to the battery life, screen resolution and the storage options. As for most other features, there’s little to choose from. Physically the devices are about the same size weight and thickness. Software is a little better on the Samsung but the addition of a “barometer” for example will not really be of much note to many. Costs are comparable – carriers are much more common for the Samsung. The display will most likely swing it for many buyers – the battery life too – either way they are both a great phone to use and own!

Author Bio:- This post is contributed by Raymond Ray. He is a salvagedata data recovery engineer with an extensive background in researching about technology and gadgets. He loves writing tips and tricks about technology related topics.