Do smart phones have a naughty side? Have you ever typed and sent a text message only to get a strange response? Upon taking a further look, you discover that unbeknownst to you, your “smart” phone has changed your message into something completely inappropriate. It happens all the time, in fact there are hilarious websites dedicated to the perverted things our smart phones come up with. 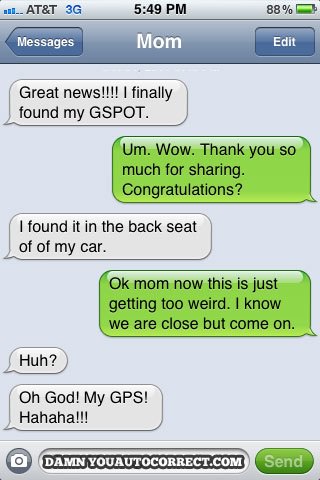 There is a place and time when incidents like this are funny and sometimes even appropriate; however when sent to a family member or colleague they can come off as inappropriate and unprofessional, maybe even as sexual harassment. Although they may be embarrassing for the person sending the text messages, for others they add hours of laughter and entertainment.

One Person’s Misfortune is Another Person’s Good Time

Auto correct mishaps are becoming so popular they have even gone viral, and now there are several websites whose only purpose is showcasing these inappropriate texts for other’s enjoyment.

Here is a short list of places to view these hilarious text messages.

Damnyouautocorrect.com is a website with literally thousands messages to view and new ones are being added on a daily basis. The auto correct messages are even divided into categories for easier site navigation by best of, just submitted and a large archive library. 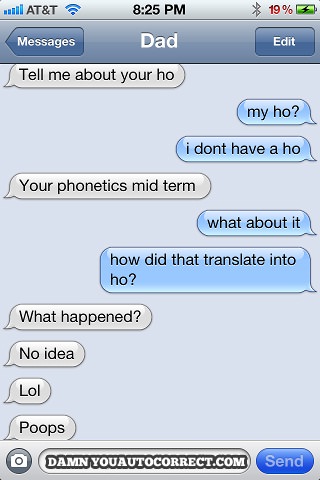 Autocorrectfail.org is another great site where a person could literally spend days reading all of the auto correct mistakes created by iPhones, the only problem is the days of reading turns into weeks of laughing.

Funny iPhone AutoCorrect Fails is a Facebook page completely dedicated to these funny accidents. It gets updated regularly and offers some of the best around. Before attempting to read any of the perverted text messages, you should make sure that you don’t have any plans for a while because this page is addicting. 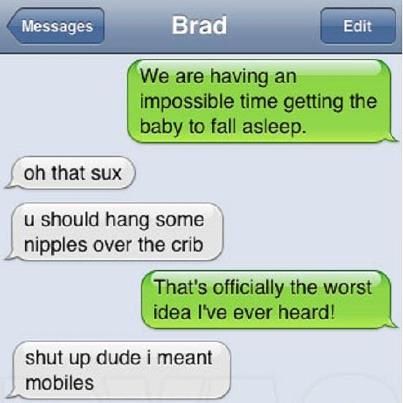 Clumsy Thumbsy is a new segment on the “Ellen” show has been a regular part of the daytime talk show since September of 2011. Viewers began sending in their own smart phone mishaps and Ellen decided that these ridiculously funny mistakes were worthy of their own spot on the show. “Clumsy Thumbsy” quickly rose in popularity and is now one of the more popular parts. Occasionally Ellen even shows one of her own texting accidents for the viewer’s entertainment. 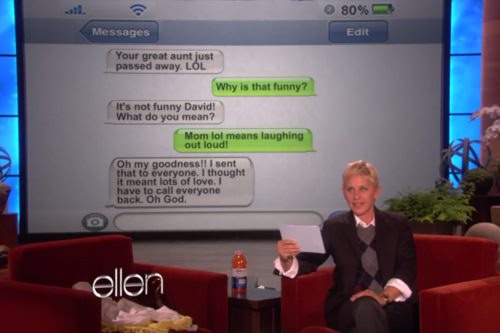 When the Auto Correct Mishaps Aren’t so Funny

Just three days after a deadly shooting at Chardon High School in Chardon, Ohio, a student sent a text to a person that he thought was a friend. The intended text message was “gunna be at the west hall on Tuesday,” but the actual message came out saying “Gunman at the west hall on Tuesday”. Unfortunately, the student sent the text message to a wrong number and the receiver immediately alerted the authorities. Talk about bad timing.

Even a simple text message between family members can easily be misinterpreted when words are unintentionally corrected by a phone. 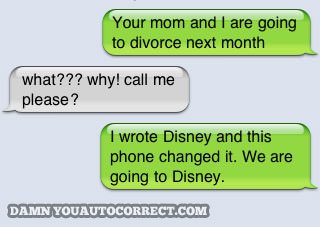 When trying to find cell phone plans make sure you get a data plan that enables you to search funny websites such as damnyouautocorrect.com so maybe next time you will think twice about quickly pressing the send button. As the saying goes “an ounce of prevention is worth a pound of cure,” a quick check can prevent a potentially large problem.

Hopefully, these funny mishaps will start making people think twice when using an iPhone, and just maybe our smart phones are too smart for their own good.