Thanks to technological advancements, we can now automate several tasks that previously required lots of time and effort.

API for image classification to automatically categorize images based on their content. Image recognition services typically identify people, places, objects, and several other elements in an image.

What Is An Image Recognition API?

Image recognition technology uses AI and machine learning/deep learning techniques to automatically analyze an image and identify different elements within the image, such as people, objects, and places.

Depending on the machine learning model or algorithm, an image recognition service can detect a specific element or assign an image to a category.

Some use cases of Image recognition include:

Image classification: It refers to categorizing or classifying images based on their content. The image classification API is widely used in e-commerce applications like image retrieval and recommender systems.

Image tagging: Image tagging also involves classifying images based on several objects or elements in the pictures. Image tagging categorizes images with a higher degree of accuracy than image classification.

Autonomous cars: Image recognition is widely used in autonomous cars to recognize different traffic signs and signals, such as a stop sign.

Robots: Just like autonomous cars, image recognition can be used in robotics to identify objects and improve autonomous navigation.

Text extraction: Many businesses also use image recognition to extract text from digital images. We can also use an OCR API for this purpose.

What Are Some Of The Best Image Recognition APIs? 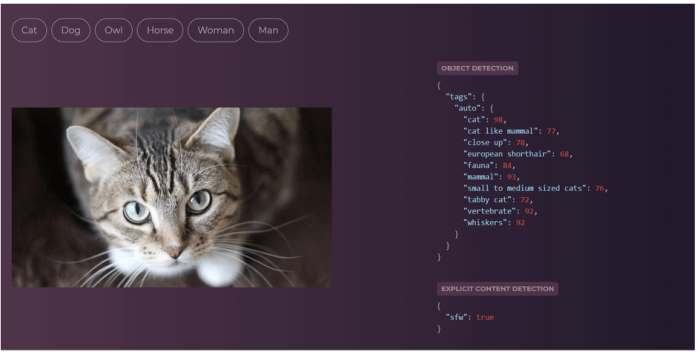 Here are the key features of Filestack Image Recognition API:

Object Recognition: Filestack’s image auto-tagging service allows users to quickly and easily abstract what objects are present in the uploaded images. These include people, transportation, animals, and several other categories.

Object Detection: While object recognition tells users what objects are in their images, Filestack’s Object Detection detects and locates them in the photos using state-of-the-art neural networks.

Content Detection and Moderation: Filestack image intelligence can also help you to automate image moderation by scoring the images using two metrics: “safe for work” and “not safe for work.” This allows you only to show content that complies with your rules.

Amazon Rekognition is another advanced image recognition API that efficiently automates image and video analysis using advanced machine learning. Additionally, you can use Rekognition for 12 months with AWS free tier.

Some of the key features of Amazon Rekognition include:

Computer Vision APIs: Rekognition provides pre-trained, customizable, and easy-to-use computer vision APIs that you can easily add to your apps. You don’t have to build your machine-learning models from scratch.

Images and Vidoe Analysis: With Rekognition, you can instantly analyze thousands of images and videos.

Image And Video Moderation: Rekognition accurately detects unwanted, unsafe, offensive, and inappropriate content within images and videos. You can use the Rekognition APIS in broadcast media, social media, advertising, and e-commerce-related apps for a safe user experience.

Face Detection, Compare, and Analysis: Recognition can efficiently detect faces in images and videos and identify attributes like glasses, open eyes, facial hair, etc., for each image. It can also determine a face’s similarity by comparing it with another picture.

Labels Detection: With Rekognition, you can easily detect several objects and scenes within images and different activities like ‘playing soccer’ and ‘delivering a package.’ Users can train their models with ten images to detect custom objects like logos.

Text Extraction: Rekognition also allows you to extract distorted text within images. You can also extract text from videos. 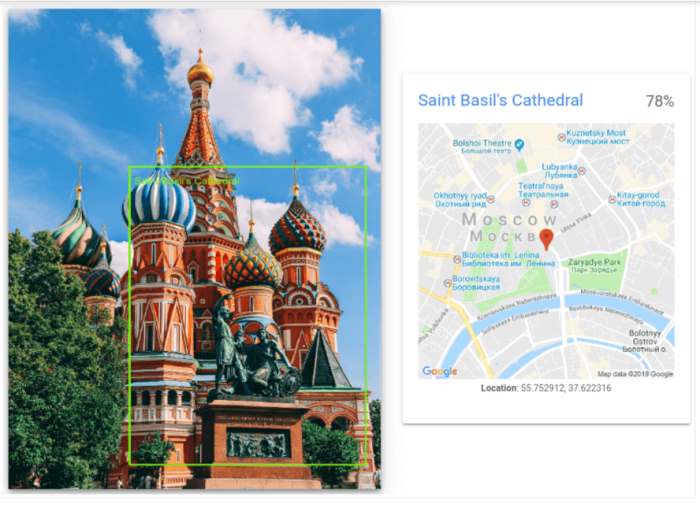 Some of the key features of the Cloud Vision API include the following:

Face detection: The face detection feature can detect multiple faces within an image, and it can also identify facial attributes like wearing a headband, emotional state, etc.

Landmark detection: This feature identifies well-known structures within images, both natural and human-made.

Label Detection: The Cloud Vision API can also extract information related to different entities in an image. It covers a wide range of categories.

OCR: The Cloud Vision API can also detect and extract text within images using OCR technology. It can even identify handwritten in an image, TIFF file, or PDF.

Suppose you’re a developer looking to integrate image recognition into your SaaS app. For example, you can use a powerful image recognition API, such as Filestack Image Intelligence, Amazon Rekognition, or Google Cloud Vision.

What is an image recognition API?

Does image recognition use AI and ML?

What is the best image recognition API?

Some of the most accurate image recognition APIs include Filestack Image Intelligence, Google Vision API, and Amazon Rekognition.