If you have downloaded torrents before, then there is a good chance that you already know how hard it can be to find a reliable torrent index. This is just the nature of torrenting. New sites go up all the time and old ones get taken down or relocated constantly. Torrenting, although beloved by myself and millions of other techies around the world, is not so popular to certain powerful institutions. Most notably, copywrite lawyers, media companies, and many governments are not so fond of torrenting because, well, torrent sites threaten to unroot the very core of the for-profit entertainment media system.

One could go as far as to say that pirating can be seen as a tangible threat to capitalism itself. Therefore, these entities do everything in their power to shut torrenting sites down whenever possible. This is why sites like The Pirate Bay, for instance, are forever changing their domain names. They frequently have to seek safety under various jurisdictions and different servers. Which torrent sites, then, are going to be the most reliable these days? Well, let’s take a look and see, shall we? These are the top 5 torrent sites for 2020. 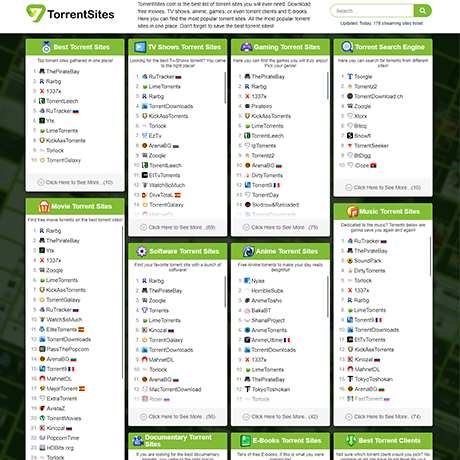 An old classic, to be sure, The Pirate Bay is arguably the most popular torrent index and search engine of all time. Few logos are more iconic than that of The Pirate Bay’s valiant ship sailing high the modified jolly roger (the cassette tape and crossbones) that has become synonymous with file sharing all around the world.

Although The Pirate Bay has been hit with its share of lawsuits, cease and desists, and warnings from multiple governments and powerful corporate interests, its ship has remained solidly intact for nearly 20 years now. This enormous torrent index is as great as ever, too, with millions of torrents of all types. Users of The Pirate Bay will enjoy great site design, fast downloads, verified torrents, magnet torrent links, and an active community of users.

It is true, however, that the site goes dark from time to time. But, for the most part, you’d be hard pressed to find a more resilient and dedicated torrent site than The Pirate Bay.

That’s right, ladies and gentlemen, Kick Ass Torrents is back! Abbreviated as KAT, this torrent index was the most popular in the world at its peak. However, its reign was, unfortunately, cut short. Not only was KAT shut down and the domain seized by the United States government in 2016, but the alleged owner of KAT was also arrested.

Torrent communities, however, seldom go down without a fight. The very same year, it turns out, that the original KAT site was taken down by the US government, former KAT staff members were already launching mirrors. Some of those mirrors are still up and running today, even if they have been kept a little quieter than the original KAT website. So, don’t be too loud about it, but feel free to enjoy the classic look and feel of one of the best torrent sites of all time by visiting KAT today.

Let’s keep taking a trip down memory lane, shall we? I hope that I am not the only one here who is old enough to remember a little P2P file sharing program called Lime Wire. This was – alongside Kazaa, of course – the freeware to which everybody flocked once Metallica essentially ruined Napster. The spirit of Lime Wire, I am happy to report, lives on in the torrenting age, thanks to Lime Torrents.

Lime Torrents, thankfully, is much faster and more versatile than Lime Wire once was. Browse millions of music, movie, TV, anime, games, and software files. A decently active community of peers, too, will make sure that torrents download in a timely manner. This torrent site is a blast from the past with a very modern twist that is bound to come through in the clutch.

This one is my personal favorite. Although a little more obscure by comparison than, say, The Pirate Bay, 1337x is one of the most reliable torrent index sites on the web. Ever since I started using it a couple years back, not once have I been unable to use it. Easily one of the most consistent torrent sites available, 1337x will not disappoint.

1337x also offers a somewhat unique site design and layout, which may not be the most important thing when it comes to choosing the best torrent site – but it adds a nice touch, nonetheless, in my opinion. Although I started out only visiting 1337x whenever The Pirate Bay was down, it has quickly become my go-to torrent site, and one that I highly recommend.

If a flashy interface and intuitive user experience, however, is something that is of importance to you, YTS will be a natural fit. This torrent site has thrown out the rulebook when it comes to the typical torrent site design template. YTS feels much more like a premium streaming site in the natural and immersive way that it enables users to browse torrents.

The only downside here, of course, is that YTS only offers movie torrents. This site, though, can be a great introduction to the value of niche torrent sites. This paired with its awesome design and extensive 4K library made it an easy choice to include on this list, even though it only offers one kind of content. Not only does YTS have a sprawling list of movies available in 4K quality, it also has titles that would be next to impossible to find on a more generalized torrent site like The Pirate Bay. YTS is a film buff’s paradise.

When it comes to all the best torrent sites that the web has to offer, though, these 5 are not even the tip of the iceberg. For a comprehensive list of every one of the best torrent sites worth knowing about (conveniently separated into an organized index by category), each with a thorough and honest review, be sure to check out Torrentsites.com – you’ll never be torrent-less again!