Scrum vs. Kanban Boards – What are the Differences You Need to Know 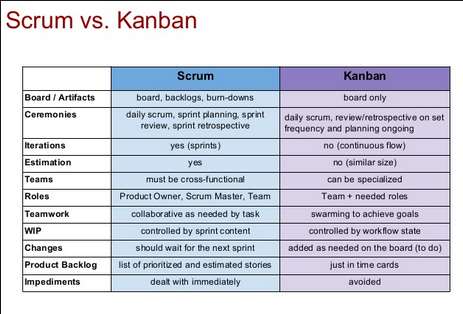 A period of time which is short, uniform, and keeps repeating itself, is termed as Sprint. A board which tracks the work done in sprints is known as a Scrum board. The duration of a sprint should be in such a way that keeps the focus of the team maintained while delivering enough work in that particular period of time. You can relate a scrum with a school test. There are some set tasks to be finished in a certain amount of time, and only the assigned tasks have to be done.

It is a tool which helps teams with Sprint backlogs. There are many physical forms of this board, as well as several virtual ones, but the core idea and the functionality remains the same. The team updates the scrum boards, where all those items are displayed that are needed to be completed in the ongoing sprint. For every issue and task, Scrum board tends to use the output from the complete team for the solution.

Kanban board is a tool which helps you to optimize the flow of your tasks and helps you visualize your workflow. They usually make use of sticky notes and communicate the following:

These boards are both physical and virtual. It tracks the process flow and maintains the list of steps covered in work so far. Each task needs to be completed for the whole work to be considered as done. A Kanban board can be compared with a basketball match, in which each completed task gives you a point, and the whole team is trying to lessen the time consumed between scoring each shot. In a Kanban board, work is divided into smaller parts, which is then completed by the team, one at a time.

Kanban Board vs. Scrum Board

Both Kanban and scrum boards are amazing scheduling systems. They make look similar to a casual observer, but upon close inspection, you would see several differences among them. In spite of the differences in their setup, both the Kanban Board and the Scrum board, place emphasis on teamwork.

A few of their differences are explained below.

There is no set structure as far as Kanban Boards are concerned. There is no one key role, and the structure as a whole is very fluid.  There is no need for cross-functionality. The Kanban board fulfills the requirements of the team as desired.

The goals of the team are set by the product owner.

The timeline, in which the tasks need to be done in order to achieve the goals, is set by the Scrum Master.

The tasks which are defined by the ultimate goal are accomplished by the development team.

In Kanban boards, tasks are prioritized first. The deadlines are made according to the requirement of the project. Changes are made along the way and as the process moves forward. There is room for changes in the following:

In a scrum board, there is a complete schedule which is predetermined. Priorities play a major role, but the abilities of the team also play a critical role in designing the schedule. Predictions need to be made very accurately. At the end of each sprint, a deliverable is required. So, all the tasks need to be finished at the end of that particular sprint. If the team is ahead of its schedule, it is also not allowed.

Since Kanban boards have a free-flowing schedule, this leaves room for changes to take place while the project is still going on. If the tasks are completed before the scheduled time, a new task can be assigned. As a result of this, changes and modifications can occur in real time.

In a Scrum board, there is no room for alterations, and you cannot deviate from the original plan. All attention must be paid to the tasks in the current sprint.

A few of the differences between both the boards have been highlighted above. The idea of workflow and the deadlines differ between both the boards.  There are pros and cons to each of the system. You can choose either of them as per your requirements. If your work and team are prone to certain changes and you are working on a smaller project, you should opt for a Kanban Board. If your work and team are solid and not fluid and you have to deliver larger projects in a particular period of time, then Scrum board is for you.