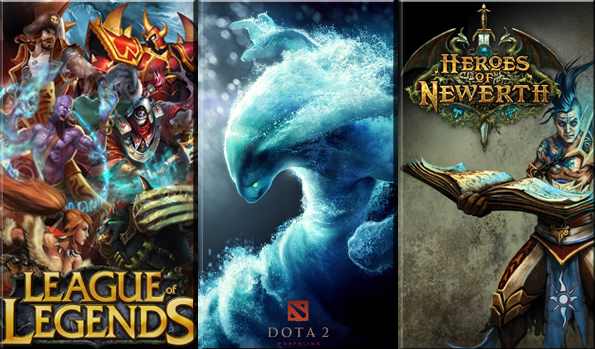 MOBA (Multiplayer Online Battle Arena) games have sprung forth to become the most popular genre of online gaming, easily eclipsing FPS and sports games. You only have to look at the money available to win at live gaming tournaments to understand how prominent they’ve become. But why is that exactly? Well, the action is fantastic, the characters are engaging, and you know for sure there’s always someone to test your might against.

Another reason MOBA games have become so popular is due to the online communities built around them. The players are all incredibly passionate and dedicated to the games, with many of them starting to create websites specifically for their teams (or clans), which you can learn more about on the following page: https://www.1and1.com/clan-website. In short, MOBA games aren’t just a hobby for some, but a way of life!

In a similar way to our top five MMORPG games list last year, we’re going to discuss some good and bad points of three of the best MOBA games currently available. Let’s take a look.

League of Legends is a major title in the eSports world, and it’s not hard to see why, particularly when around 67 million people log in and play each month. LoL continually releases patches and bug fixes to ensure the gameplay is as smooth as possible. Plus, there are more than 100 unique characters to select and new ones added every now and then, and all have their own fighting style to match your preference.

Despite the popularity, a common criticism of LoL is the fact that it’s very hard for new players to feel included and even stand a chance against the veterans. Gameplay before you’ve reached level 30 is said to be very unbalanced, with a considerable amount of matches needed to get anywhere close to winning. Despite the tough learning curve and some occasional weird animations, League of Legends will only continue to rise in popularity.

DOTA (Defense of the Ancients) 2’s following is massive and has a very active scene with regards to professional eSports tournaments. Gamers love DOTA 2 for the fact that all characters can be used right away, with no unlocking or purchasing necessary. Another boon for this MOBA game is the Workshop Tools, which allow players to make their own custom games (that others can play too). Like LoL, the characters are varied and interesting, with each game able to be swayed in many directions due to the strategies presented. It’s also considered one of the more balanced MOBA games and has cutting-edge graphics.

On the other side of the coin, many players complain that matches can take far too long, as it might be clear that a team is completely overmatched and will lose, but there’s no option for a surrender. Again, like League of Legends, hundreds of hours of gameplay are needed to get to grips with the gameplay mechanics and to raise your level, and there has been a lot of disgust that beginners and those living in non-English countries are frequently treated harshly.

Although it still has a way to go to catch up to the likes of LoL and DOTA 2, SMITE is still a hugely entertaining MOBA game that is definitely rising in the popularity ranks. SMITE is a little different from others in the sense that it’s in the third-person view. Furthermore, the character list is full of recognizable names from Greek, Roman, Norse, and Egyptian mythologies, plus several more. With familiar names like Thor, Aphrodite, Ares, Hades, Hercules, Isis, Loki, Ra, Poseidon, Zeus, and Odin, SMITE already has a big advantage over competitor games.

Other than the characters, SMITE’s positives include the fact that there are six varied game modes, plus a Match of the Day mode that is always different – a nice surprise for gamers every day. Controls are easy to manage and attacks are simple to execute, the community is said to be one of the friendliest of all MOBA games, and the graphics are incredibly detailed.

Players have stated that the drawback of SMITE’s third-person view is that it’s difficult to know what their teammates are up to, with the only solution being a lot of communication. Others have expressed dismay that characters favoring magical abilities are somewhat disadvantaged because they cannot buy certain physical items.