Windows Phone 8 OS was first launched for Nokia Lumia 920. Microsoft indeed made a wise move because the colorful phone suits the colorful interface on Windows Phone 8. When Microsoft abandoned Windows 7.5, phones running on it were still sold. However, Microsoft came up with a new version soon and it is quite appealing. HTC is the next colorful device to run on Windows Phone 8. This OS has some good features such as live tiles on the home screen. These tiles can be resized based on how many live tiles we have open. It also shares the kernel with Windows 8 OS for desktop. As it supports multi-core processors, it can be used on devices with different hardware specs. Come with me to explore the features of Nokia Lumia 920 and HTC 8X. 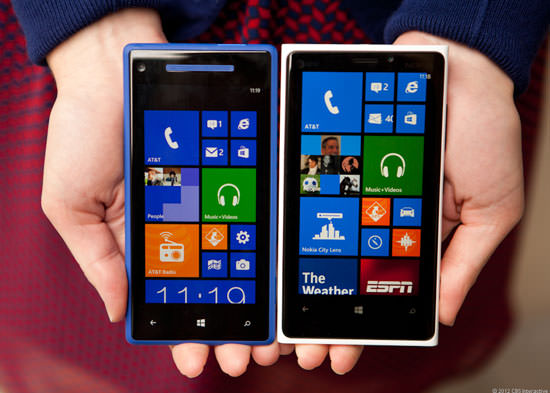 Lumia 920 comes in yellow and grey, while HTC 8X comes in blue, red and yellow. The yellow model of Lumia 920 is all glossy and is made of polycarbonate and the grey model has a matte finish. All the models of HTC 8X have a matte finish, which is soft to touch and also has a grippy texture.

The display of Lumia 920 measures 4.5 inches and the colors look bright and beautiful. It boasts of an IPS WXGA screen with PureMotion HD technology. The 4.3 inch display of HTC 8X is as good as Lumia 920 and it has a 720p Super LCD2 display. You may note that this pixel spec is denser than Apple’s Retina display. To be appropriate, HTC has done a better job.

Lumia 920 has an 8.7 MP camera, but it is not as good as expected. The shots taken in bright light aren’t good and so this phone is best for night owls. The 8 MP camera in HTC 8X is powered by HTC’s ImageChip and it works perfectly well in both dim and bright lights. The color balance and exposure are extremely good and accurate. You can capture more details with it than Lumia 920. For those who want to have fun taking pictures, HTC 8X is the best phone.

Both the phones run on 1.5GHz dual core Snapdragon processor, which ensures lag-free gaming. You can also use processor-heavy applications without a bit of slowing down. Nokia Lumia 920 comes with a 1GB RAM and a storage space of 32GB. HTC 8X has built-in flash storage of 16GB and you might want to notice that it doesn’t have a microSD card slot. And, you know what that means; you will be stuck with 16GB. There’s no way out.

Windows Phone 8 is a new OS and hence it has its own merits and limitations. Lumia 920 comes with Nokia’s own preloaded apps; the regular apps that you see on other Lumia phones. The social apps take a notably long time to refresh. While the HTC 8X comes with a few preloaded apps, these are not like bloatware. However, you can’t see official apps of popular services like Google Plus, Instagram, Dropbox, Google Music, etc., in HTC. This comes as a big disappointment with Windows 8.

I vote for HTC 8X because it has a nice camera with good features. Though the storage space is low compared to Lumia 920, there is no other reason to tell why it can’t be the better phone of the two. While Nokia Lumia 920 isn’t as bad to be called a loser, it does miss some features and functionality of HTC 8X.

Author Bio:- This is a guest post by Sharon Thomas of thecornersuite.com, a site that offers savings and current information on dish network internet.