Is Motorola Xoom a Prudent Purchase?

Motorola Xoom launched around the same time as the iPad 2 and both share many common features. However, Motorola Xoom stands out as the first slate to run on Honeycomb. Its tight integration with Google and related services (including Gmail, Google talk and Google earth etc.) has made it a product being looked up to, in its potential market.

It is a tech spec enriched product with attractive specifications, an introduction to which is provided below: 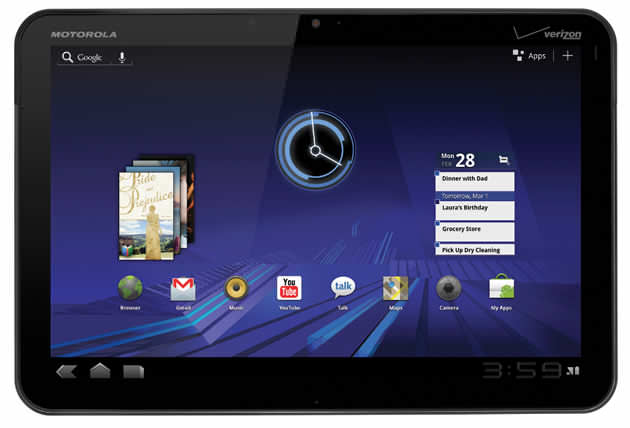 Its sleek exterior may not strike you as something innovative or never seen before and in fact with its 9.8 inch length, 6.6 inch width and around half an inch thickness, it might appear to be piggybacked from other existing tablets. More like a slightly longer and more intelligent version of iPad in black. Perhaps owing to the constraints of the configuration edifice of tablets or due to Motorola not attempting any harder, the appearance of the tablet in spite of being handsome is not original. The sides framing the wide touch screen are fabricated using familiar machined metal, slightly curved at the edges (Verizon’s version however, is a matte black painted one that is very prone to picking finger prints). The 1.5 pounds sleek body of the Xoom works in its favour for it is conveniently portable and easy to carry and doesn’t strain the arms (unless held for a lengthy period of time).

You may have to face the speed hurdle while transferring data from/to your computer and sifting through applications may not be possible as rapidly as anticipated but the efficiency of browser connectivity and integration, and the robustness of the incorporated games could be mind boggling. The responsiveness of UI and touchpad reaction is optimum and meets the standards set by iPad. The display features exceed that of iPad by a larger display screen and resolution magnified to 1280 x 800 in comparison to apple’s 1024 x 768. Besides 1GHz, NVIDIA Tegra 2-based slate which enhances a capacious 1 GB, DDR2 RAM and 32 GBs of internal storage, the device is also equipped with wireless connections such as WiFi 802.11b/g/n (with a range of 2.4GHz and 5GHz), Bluetooth 2.1+EDR, Verizon’s EV-DO Rev. Xoom comes with high resolution front and rear cameras. Its ability to display flash and HD video is one of the features that set it apart from iPad. The aptitude of Motorola Xoom towards multitasking and its promise of future upgradation of the device by installing a free hardware that would enable Xoom the access to Big Red’s 4G LTE network, gives it a distinct edge over its competitors.

However, as we all know good things come with good payback; the Motorola Xoom is priced at $799. Indeed, an expensive possession. But with its promise of future optimization and honeycomb tablets picking up the stream (with the app store consisting of around 150,000 applications) the Motorola Xoom is what might become future’s inevitable essentiality. Conclusion? With its Power packed performance Motorola Xoom is a prudent purchase.

Author Bio:- This article has been contributed by Nitin Aggarwal from OffshoreAlly. His company has a small team of smart virtual assistants and VA for real estate.