Quicktags are basically predefined html tags that can be used to quickly apply a html function without the need of entering the original code. User only need to select the text and then click on the quicktag to apply its function. For example if you want to make a word or sentence bold and italic,  you can use the predefined tag to apply its html coding.

Adding such quicktags in your blog comment form can allow your readers to easily bold, italic or apply any other html code in the comment.

By default this option is not available in wordpress, but you can use a plugin called Comment Form Quicktags to add several html tags in your blog comment form.

Install the plugin in your blog and it will automatically add several quicktags in your blog comment form. You can remove or add your own quicktag from Settings> Comment Form Quicktags. 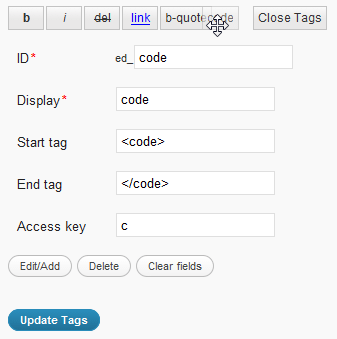 The plugin also allow you to limit the quicktags by user roles. However you can enable the quicktags toolbar in comment form by selecting all user role.

After activating the plugin it will automatically insert the toolbar just above the comment form area. However in some themes it will appear below or any other location. If you know CSS then you can customize the appearance of the toolbar by applying CSS code. Hope in the next version the developer of the plugin will allow users to customize the appearance of the toolbar from within the comment setting panel.