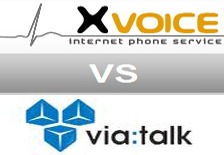 I am a veteran internet phone service user with years of exposure to this industry. Ever since the first time this service was introduced, I have been using different internet phone services available to the customers for usage. This article that I am writing will compare two of the most renowned VoIP providers out there named Axvoice and ViaTalk. Let us see how each one of them performs against the different important criteria.

New to VoIP customers often don’t know how much the features are important in choosing a phone service. They usually go for the number of features instead. This is one of the most terrible mistakes that they make. The key is not to go for the number of features but instead see what features will help satisfy your phone needs. When we weigh both Axvoice and ViaTalk, we don’t find any major difference between these two. However, having said that, Axvoice offers the BYOD support or bring your own device feature. This is a feature that has been specially designed for the existing VoIP customers that are planning to switch to another service. When this feature is available, the customers can easily switch to Axvoice without the need to buy its equipment while using the same equipment they were given by their previous VoIP providers. This saves them extra cost and ViaTalk does not offer BYOD.

Voice quality is one of the major considerations in choice of the right kind of internet phone service. When comparing the voice quality of Axvoice with that of ViaTalk, I found a slight edge for Axvoice users. There is no particular problem to be disclosed about ViaTalk but there are times when long distance calls get minor interruptions. On the other hand, there is no such issue that can be detectable using the Axvoice phone service. The clarity of the voice that you can have with Axvoice is another clearer mark of superiority that Axvoice has over ViaTalk in terms of voice quality offered.

When looking at both of these phone services, reliability is another distinguishing factor. I used both of these phone services but the major issue that I found with ViaTalk was that at times there were interruptions and even total disconnections, which was a real disturbance for a phone user. However, most of the times, Axvoice was found clearly connected without any issues, even for longer periods of time. This was another criterion in which Axvoice was clearly ahead of ViaTalk.

When it comes to making calls abroad through internet phone, all VoIP phones are cheaper than landline phones, but still they have their competition to beat. When I compare the calling rates of Axvoice with that of ViaTalk, I find ViaTalk a lot more expensive phone service for making international calls. On the other hand, Axvoice offers such low calling rates, that hardly any other internet phone service can beat them.

ViaTalk and Axvoice, both are very exceptional VoIP providers. Axvoice however has a definite edge ViaTalk because of the high voice quality, low call rates for international phone calls and highly reliable phone service.