I have noticed that some bloggers blame traffic exchanges in getting their AdSense accounts banned. And really – Google has clearly stated that bloggers and webmaster should not use any kind of traffic exchange systems where no real people are involved. 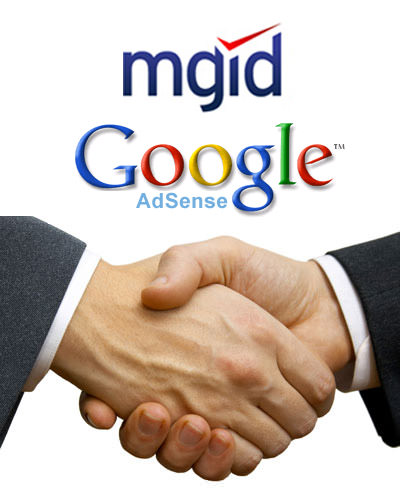 Since I’m using both AdSense and MGID I have decided to make a research to find out, if there’s any danger in combining the two. To tell the truth, it’s 100% safe. The reason why some publishers fear it is that they may not have noticed some important things. Which things? I will explain it below.

Some bloggers refer to Google AdSense policy, which prohibits using traffic exchanges, but that note is only valid to the old style 1:1 traffic exchange programs where webmasters and users were encouraged to click around their own websites in order to earn credits. Such traffic exchanges are really damaging advertisers.

But MGID isn’t an obsolete 1:1 system. It’s the traffic exchange web 2.0 of the new generation which is 100% compatible with AdSense and has a smart anti-fraud system which doesn’t allow fake clicks or content impressions.

Another wrong opinion is that traffic which comes from new traffic exchanges is generated artificially, and that web 2.0 types are some sort of paid-to-click, paid-to-surf, auto-surf or click exchange programs.

There’s no money paid out to users, and no rewards of any other kind either. The only benefit you receive is targeted traffic consisting of real visitors. In fact it’s against MGID’s policy to work with sites participating in traffic, link, and click schemes, auto surfing, or fraudulent click-exchange programs.

Incentives to view pages were necessary for the traffic exchange programs of the old type, when people had to view pages to earn credits. Web 2.0 systems are against it. People click only if they want to.

Next fear is non-convertible clicks and adult content. Judging from my own experience, MGID’s editorial team works good enough to create relevant news & make clicks convertible. When I wished to create news-previews myself, they gave me access to news-creation panel. It takes some skill to create them, but it’s a good way to make convertible clicks yourself. As for the content – MGID stands for family-friendly content. In fact it’s one of the MGID’s core values.

As you can see – there’s no need to worry about compatibility of MGID & AdSense. I even would advise you to use both as it will really benefit you.