Laptop and PC Pop Stars: How to Become the Next Rebecca Black

The internet is a communication tool which has democratised the ability for individuals to share their own content with other people in mass. Video social networking site YouTube in particular then, has provided an avenue for a number of internet stars come to light over the last few years, including fourteen year old wannabe-pop tween Rebecca Black and her cringe worthy single ‘Friday.’

The song and its accompanying video might be (in fact…definitely are!) terrible but the joke might actually be on the rest of us considering the amount of money she has made from subsequent television and radio appearances. The song – which Black’s mother paid $4,000 for her to record – and her new found notoriety saw her also land a role in a recent Katy Perry music video (‘Last Friday Night (T.G.I.F)’) – admittedly, Black is far more successful than some of us criticising her!

That’s not to say that the rest of us couldn’t follow in her footsteps though. The following explains how one already has the potential to become the next Rebecca Black at their very fingertips, simply in the form of a laptop (or netbook) or desktop PC. 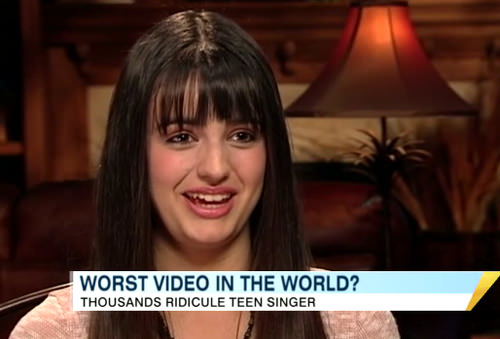 Wait a second…How can I become an internet pop star when I can’t play any instruments?

And Rebecca Black can? Who needs actual musical skills when beats can be made on your behalf by a producer? For your very own make believe studio producer, you could do worse than to visit www.ButtonBeats.com. Here you will find a plethora of digitised instruments (including keyboards, guitars, violins, electronic drums kits, decks and mixers) all of which can be controlled using your mouse or computer/laptop keyboard.

Button Beats even has its own built in audio recorder as well as microphone compatibility so you’ll be able to create your first internet music smash in no time!

Even when you have finished laying down some “tasty beats” for your aural pop assault, I am sure you’ll spend many more hours experimenting with the various bings, bops, bleeps and beeps that are available on the website. Just don’t take your eyes off of the prize of internet pop stardom for too long!

I can’t sing either!

In this day and age, one doesn’t have to be a great singer in order to have a pop hit. Auto-tuners have the ability to make anyone sound pitch perfect, if a little robotic concurrently but hey, if it’s good enough for Black (and it most definitely was)…

There are many auto tuners available online, either as free downloads or onsite Flash programs. Simply Google “free auto tuner” to survey your options for acquiring one and never hit a bum note ever again!

This is something that Rebecca Black also no doubt experiences on occasion if her lyrics for ‘Friday’ are anything to go by:

7am, waking up in the morning
Gotta be fresh, gotta go downstairs
Gotta have my bowl, gotta have cereal
Seein’ everything, the time is goin’
Tickin’ on and on, everybody’s rushin’
Gotta get down to the bus stop
Gotta catch my bus, I see my friends (My friends)

It’s Friday, Friday
Gotta get down on Friday
Everybody’s lookin’ forward to the weekend, weekend

The best advice I can give potential YouTube pop stars is to just have fun with what you want to say in your newly formed song and don’t get too hung up on any political points you wish to make in your lyrics because they’ll be evident to those who choose to read the words at a deeper level, as is the case for ‘Friday’ (genuine LOL of sarcasm).

Black might have lacked creativity in her ability to get her lyrics to rhyme (a basic staple of popular music) but using an online rhyming dictionary will provide you with an endless list of options. Try www.TheRyhmeZone.com for size.

How can I edit my pop efforts?

It is unlikely that your song will be perfectly recorded in your very first Button Beats recording take and as such, you will probably want to edit your tune a little before releasing it into the public view.

You could invest a large amount of money for a program such as Pro Tools but its far cooler to go down the ghetto root and acquire a far less advanced and free audio editing program such as Audacity. Not only will this be far kinder to your purse strings but you also do not want to end up with a song that sounds too polished because it will be far less likely to go viral – ear offending efforts nearly always spark more social sharing than genuine talent!

Another bonus of Audacity is that its simple interface means that it is easy enough for the vast majority of people to use, even complete computer noobs.

What about the visual element? How do I create a kick ass music video?

What you will want in your accompanying music video will be very much dependant on the topicality of the song that you have penned but don’t be afraid to experiment – you don’t even have to have human beings in your video if you do not wish! A video fully comprised of poster painted hands… toppling Jenga block towers…or anything else vaguely visually stimulating will suffice.

And don’t worry if your video looks less than a Hollywood production – this in fact might actually aid your aim to go viral! As long as an incredible sense of unjustified self belief is evident in the video, on-looking internet trolls will be stimulated enough to comment and thus; net success will yours imminently!

There are many video editors out there but for those with little experience, I suggest you use Apple’s Final Cut Pro or Windows Movie Maker for they are the easiest for beginners to get their heads around.

And there you have it, your complete guide as to how you could become the next Rebecca Black. Thankfully, this advice does not come with a guarantee of success – a good thing too! The last thing we need is millions of wannabe Black’s littering the internet.

Oh God…what have I started?

The author of this guest post is Kat Cole.