If you are put off with the small touchscreens on the modern mobile devices, there’s something to stimulate your interest – this is a new input surface that is often overlooked – your own skin!

Skinput is a new skin-based interface that allows users to use their own arms and hands as touchscreens by sensing different ultra low-frequency sounds that are generated when knocking various parts of skin.

This technology is the collaboration between Desney Tan and Dan Morris at Microsoft’s research lab in Redmond, Washington and Chris Harrison at Carnegie Mellon University. The researchers have proved that Skinput allows users to just tap their skin to play games, make phone calls, control audio devices, and browse through systems.

How Does Skinput Technology Work?

In this technology, a menu, keyboard or any other graphics are spread on to the user’s forearm and palm from a projector that is embedded in an armband. This band has an acoustic detector, which decides the part of the display that has to be activated by the touch.

The scientists explain that the changes in bone density, mass, and size along with the filtering effects from joints and soft tissues mean various skin spots are acoustically discrete. The software goes with sound frequencies to particular skin spots, permitting the system to decide the skin button pressed by the user. Following this, the prototype system makes use of a wireless technology like Bluetooth to send the commands to the device that is controlled (ex: iPod, phone or computer).

Skinput thus functions by listening to vibrations of the hum body. And, this is indeed a groundbreaking concept in itself. It’s definitely the most unique form of touch sensitive so far 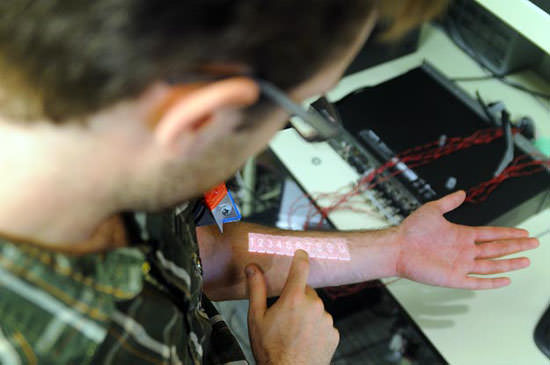 Skinput was tested by 20 volunteers, who gave a positive feedback on the navigation ease. Scientists have stated that the system works well even when the user is running or walking. At present, the acoustic detector is said to detect 5 skin spots with an accuracy of almost 95.5%, which is adequately versatile for several mobile applications.

The researchers say that the Skinput technology is motivated by the increasingly tiny interactive space of the modern pocket-sized mobile devices. They regard the human body to be an appealing input device not just because you can find 2 square-meters of external area, but also because most of it is easily reached out by your hands (ex: torso, upper legs, arms).

If Skinput could turn out to be a commercial veracity, it could redefine the perception of general gestures. It could actually turn the entire body into one huge jumping, quivering, and dancing interface. And, this is just the beginning of all the fun; it may open up a whole lot of other possibilities for the technological creators to devise many new groundbreaking products.

We have seen many sci-fi movies in which human body has been used as a weapon, or a technological interface, but in the end there has always been a negative side to it. But, then we aren’t talking about virtual reality here. So, at the same time, we wonder as to what kind of threats this technology would pose to mankind, because tampering with human body to make it a touch-sensitive interface may always lead to varieties of complications, and the aftermaths can be disastrous too; after all it’s your own body, and not a machine that you can dispose-off, in case of problems.

Let’s wait and watch how this distant dream turns into reality!

Author Bio – Jeffrey is a technology enthusiast who happens to be a web server administrator by profession. He often contributes on an SMTP blog and writes for many top technological websites too.