It used to be the case that when you bought portable speakers, you knew you were in for a pretty tinny tone to your tunes. Things have moved on. Perhaps I hadn’t realised quite how dramatically they’d moved on until I tried the HiddenRadio speaker from HIDDEN.

We all want a Bluetooth speaker that’s going to deliver great quality sound; faithfully rendering our favourite music to a standard we’re happy with. Of course it’s all about expectation. It’s no use comparing the HiddenRadio speaker to top of the range, wired surround sound speakers from Wharfedale. But for a Bluetooth speaker you can easily carry around with you and put into play at home, on the beach, by the pool or in the garden, the HiddenRadio definitely delivers. 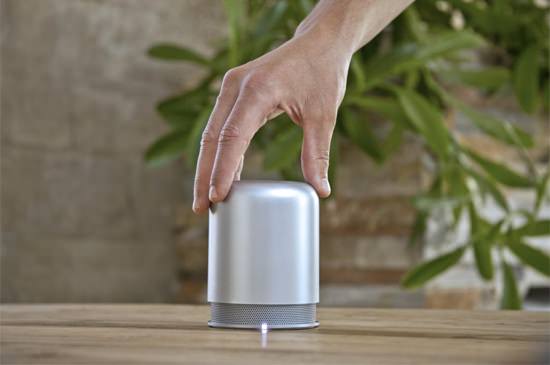 If you haven’t come across the HiddenRadio before, the first thing that’s going to strike you is its design. Simple, sleek and almost cylindrical, its gently domed top reaches just under four inches from its base. A polished metal, buttonless surface means it could be absolutely anything. It’s almost futuristic, yet somehow timeless. And that means it’ll blend effortlessly into virtually any interior design theme. It’s definitely a talking point when you pull it out at your next social event.

So what else matters in a portable speaker? At 3.8” tall (unopened) and 3.4” diameter and weighing under a pound (430g), it’s definitely portable. A little microfibre case protects the surface from scratch damage in your bag too.

We’re an impatient bunch for the most part, and we want plug and play. Thankfully the Bluetooth connectivity worked a treat; it talked to my Samsung Galaxy SIII in moments, confirmed by the illumination of a tiny blue LED in the base. Phew. There’s also a 3.5mm audio line-in embedded in the base for those of you who want to hook up directly, although using that does take the edge of the visual magic.

Turning the speaker on and adjusting the volume is a simple matter of twisting that tubular top. There’s a bit of a knack to doing it one-handed like in the promo video, but for those of us blessed with two hands it really couldn’t be much easier. No other portable speaker manufacturer has managed to incorporate one-touch volume adjustment in a package this satisfyingly pretty, so I can live with that tiny compromise.

So volume and quality are what come comes next. HIDDEN claims they’ve cranked the speaker up to more than 80db. I turned it up loud enough to be a bit paranoid about the neighbours. So, more than loud enough for indoor use. If I’m hosting a party where music takes priority over talking, then maybe I’d turn to a bigger set of speakers, but for gaming, creating an atmosphere, watching a movie on a tablet or enjoying some tunes in a villa on holiday – this is exactly what I’m looking for.

The audio is omnidirectional, so you may crank the volume a little higher than front-facing speakers, but that suits social occasions a whole lot better: plonk the HiddenRadio in the middle of the action and away you go.

As you’d expect from a portable speaker, bass isn’t exactly going to cause the fat on your belly to tremble, but it’s not at all bad – I only noticed a bit of bass distortion on a couple of the tunes I was playing – tunes with particularly heavy bass and which had a low bitrate – so that could be as much down to the poor MP3 quality as anything else.

Is the sound as rich and multilayered as I’ve experienced in wired speakers hooked up to a mid-range Bose stereo system? No, but it beats the hell out of the separate speakers on my PC and any other portable speakers I’ve ever used.

What’s more, the battery life was good too: over the course of three days’ use I went a full 15 hours without a charge. That’s pretty impressive performance.

In my view, perhaps the only slight failing is the FM radio itself, which was a bit tricky to tune. But, for me, the radio is never going to be the primary function of the HiddenRadio, even if it is an integral part of its identity.

The HiddenRadio speaker has become another reason I can’t wait for this year’s villa holiday too: great music on a funky, dinky speaker while I lounge by the pool. Bliss.

Author Bio:- Andy Drinkwater is an Internet marketing consultant based in the UK. He loves everything tech and has a desk that surrounds him with flat-panel loveliness for much of his working day. Having worked in the SEO sectors since 1999, Andy has seen changes to search marketing change over many years and loves the chase of the SERPs. You can see his site at www.inetseo.co.uk