Two of the biggest names in the online file storage industry are in the middle of a fight to get new customers, and one of them has decided to up the ante. Egnyte, who have offices in both California’s fabled Silicon Valley and in the UK are trying to entice customers with big rival Box to jump ship. In order to do this, Egnyte have been running a campaign highlighting the differences between the two companies’ services, with emphasis placed on Egynte offering customers more. 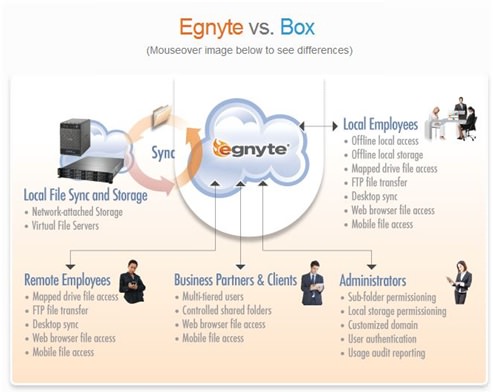 What are the differences between the online file storage and sharing services offered by Box and Egnyte? The simple answer is that Egnyte seem to offer their customers greater value for money in a number of ways. Perhaps the greatest example of this is that while Box has a 2GB limit on the size of file that you can store, Egnyte has no limits whatsoever. This alone may give businesses reason enough to switch from Box to their rivals.

Among the other things which Egnyte are highlighting in an attempt to snare customers from Box is their mapped drive, greater capacity for desktop synchronisation (Box have this capability, but the limit is 40,000 files, which is disappointing for large companies who have more than this amount to store), permission settings for sub-folders and even sub-folder synchronisation. All of this matters to businesses who want to get the most out of cloud storage.
Despite this campaign, Box is still seen as being the larger of the two companies, largely because it has been based in Silicon Valley for longer, and still manages to attract hundreds of millions of dollars in investments from venture capitalists. However, Egnyte’s campaign is beginning to gather momentum and the additional offer of free subscription for people who join them from Box for the rest of 2012 could tempt businesses to take that leap of faith.

Author Bio:- This article was written by Tom from Egnyte. He works on making the service as good as possible for all your businesses large file transfer needs.