Chrome, Firefox or IE9 – Which One is The Most User-Friendly?

Most people tend to use the browser that appears on their PC screens by default. It is the usual Internet Explorer on the Windows OS, and if it is Mac it’s got to be Safari, and with Linux, of course, it has to be Firefox. If you are one of the lucky people to have stumbled upon Chrome, you would have been stuck with it. However, if you are brand conscious and will not settle for anything less than Apple’s iPad or any other device that runs iOS, you got no other choice than to be staring at Safari on the screens of your devices. However, the truth is that PC and laptop users still have a chance to exercise their right while choosing the app that they will be using on a day-to-day basis. 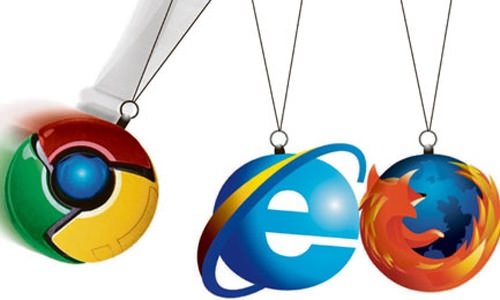 Which browser is used the most? Wikipedia has a great comparison post. You can read here.

When it comes to the most popular and widely used operating system, Microsoft Windows, you have a wide choice. You get to choose from a range of five popular options. Microsoft Corporation’s very own Internet Explorer that has become a household name with quite a few people across the world, the ubiquitous Safari from Apple, Chrome from Google, Firefox from Mozilla Corporation, and the Opera browser from Opera Software. People using any operating system other than Windows have to rule out using Internet Explorer. That leaves three other browsers that are available: Opera, Chrome and Firefox.

However, for people who never give up and like to explore other possibilities, there are other not so well known options that have their own specialties, like RockMelt, which is designed for integration for social networking and has dedicated notifications and exclusive buttons for the same. The other lesser-known LunaScape has incorporated the pages of the other three browsers, and cannot exactly call itself an independent browser. In addition, there is the sophisticated Maxthon that is extremely fast, is customizable as per your needs, and possesses the all-important tools for cloud storage and screen-capture.

Should you change the default Browser?

Now comes the tricky part, which one of these should you choose for your PC or laptop? When you buy a PC or laptop the default browser that comes along with the device is quite fast, dependable, has a great interface with handy features like browsing history, bookmarking, favorites etc. What’s more, most of the browsers are capable of letting you visit any site you choose on the Web. However, the great difference lies in the tools meant for privacy, acceleration of hardware (it should not arrest the speed of your device) and mark up standards.

Google Chrome is the preferred choice of many who know that there is no alternative when it comes to HTML5 compatibility. Close on the heels of Chrome is Mozilla’s Firefox which is not bad either, and once the IE10 is out, it should surpass Chrome, if not equal it in capabilities. Based on points awarded for tests conducted by HTML5test.com, it is Chrome from Google that leads the pack with an impressive score of 374, and not far behind is Firefox 11 from Mozilla that earned335.  It’sown Firefox 10 closely followed with 332 and not far behind was Opera with a score of 329. Lagging behind with just 302 was Safari and completing the list is Internet Explorer with a dismal 141.

Other Points to be noted

When it comes to video playing while browsing the web, Adobe’s Flash is being fast replaced by HTML5 video. Microsoft’s IE and Apple’s Safari use the H.264 codec, which has been the preferred choice for HD video for quite some time. The latest WebM format from Google is preferred by Opera, Firefox and the popular Chrome. Hardware acceleration, which is a major factor, as it, can either speed up your PC or make it run painfully slow works on the graphics processor of your PC while speeding up your browser.  Internet Explorer 9 introduced the technique where Microsoft demonstrated the positive effects of this turbo charging technique. Not to be left out, the technique was soon adopted by Chrome and Firefox as well. Apple has incorporated hardware acceleration only in the Mac version of Safari. Opera, however, is yet to implement this technique and may possibly do it in their version 12.

When it comes to privacy choices, most people are very sensitive about Internet privacy. The Federal Trade Commission (FTC) has drawn up a privacy plan and so has the Commerce Department. The White House is procrastinating over the privacy bill that is to be passed, especially after the episode of Google trying to violate the privacy protection of Safari by attempting to bypass it.

Each company has its own protection system. Internet Explorer was the first to implement its own feature called Tracking Protection. Users will be able to subscribe to block lists that will prevent ad networks from trying to attempt exchanging data thus monitoring the habits of your browser. Firefox soon followed with its unique Do Not Track feature, which is somewhat similar to your Do Not Call feature on home phones, which lets advertisers know that you do not want to be pestered with unsolicited advertisements. Of these, the most effective seems to be the most effective in discouraging third party advertisers. The others however, do not appear to be that effective.

Syncing is another feature that grades the performances of the browsers.  This is a special feature that enables you to organize your favorites or bookmarks, browsing history (can be deleted if required) passwords and many more on your PCs.  Opera, was the first to come out with the concept through its Opera Link feature, this later caught on due to the sheer convenience it offers users. Of course, Chrome and Firefox too have their own variations of the same features. Internet Explorer however is the only browser that needs to depend on third party software for such features.

So what’s your choice?

This should give you a fair idea while choosing the browser for your PCs or laptops. People who have compatible operating systems, prefer to have more than one browser and keep alternating between the choices as they please. This is more the case when there are multiple users with different log-ins, as the preferences vary. However, the great thing is all these browsers are available free of charge and it is up to you to weigh the pros and cons before you can decide.

Author Bio:- Kathryn Smith is a tech and entertainment blogger. She also identifies various Internet utility sites and shares them with fellow people. Off late, she takes special interest in studying anti-scam-phone-aggregator websites like the