How Did the Highest Paying Jobs in Texas Change?

Texas is attractive to businesses, companies, and workers for many reasons. One of them is the privilege of having no income taxes. The second-largest U.S. state boasts a growing economy, not left untouched by technology, medicine, and entrepreneurship.

Interested in Texas’ job market? For job-seekers looking forward to landing their next career, we recommend using Skillhub’s resume writing service to update your resume and pay for resume services that are affordable, efficient, and useful. They will make your job application stand out from competitors. After all, a resume is one of the most relevant and powerful tools to land a great career opportunity.

Moving on, here are our key takeaways on Texas’ job market and its highest-paid jobs.

In recent years, Dropbox, Oracle, and Elon Musk have moved out of California to Texas. Consequently, this has attracted many job-seekers to flock to Texas (Austin, in particular). A simple search on a job-searching platform shows many job postings for the said companies.

The tech scene has been booming in Texas for some years. It’s been a hotbed for technological innovation, which has produced more jobs and, in turn, has increased some cities’ populations.

A prominent example is Austin, which is reportedly the fastest growing city in the States. From 2011 to 2016, Austin’s economic growth rate was over 6%, and according to the World Population Review, Austin’s population could hit 3.2 million by 2030.

According to CompTIA’s Cyberstates Analytics (a guide analyzing the tech workforce), about 245,500 new tech jobs are projected for 2021. This isn’t a surprising number. It is evident that the technology sector has become increasingly relevant and omnipresent in the modern world.

Technology becomes increasingly more complicated to handle. So, it won’t be a surprise if salaries for such tech jobs as the two above will rise. Inevitably, more and more specialists will be demanded in this sector.

Medical Professionals Are the Highest-Paid

According to Business Insider in 2019, CEOs made an average of $239,060 annually – which helped this position become one of the highest-paid jobs in Texas during that year. However, as of 2021, a revision of the Bureau of Labour’s statistics has demonstrated that medical field jobs are better paid than CEO positions.

Moreover, with the surge of the Covid-19 and pandemic, doctors and medical specialists have been highly demanded in recent years. This might explain, for example, the salary increases for surgeons: $234,680 in 2019 to $241,090 in 2021.

Ultimately, medical professionals’ paychecks reflect the importance of their work and the costly struggle it takes to become one in the first place. Med-school is known for being expensive, and pursuing medicine is a difficult and lengthy goal that takes perseverance and grit.

Most of the top highest-paid careers in Texas involve the medical field, except the role of CEOs. CEOs have to make important corporate decisions, manage the operations and resources of a company, and be the public face of a company. For such a pivotal role, of course, they’re earning much more than an average worker.

For 2021, CEOs reportedly make an average annual income of $231,310 – and those numbers can easily go higher, thus reaching millions. For example, CEO Adair Jayson from Copart Inc. Dallas made $25.77 million in the year 2020 alone.

Moreover, Texas CEOs get compensated quite well, and on top of that, many Texan cities have been ranked by Forbes as “Best Places For Business”. With a fat pay-check and a genuinely good climate for business and work, it’s not surprising to see CEO positions up in the salary hierarchy along with doctors and surgeons.

Lawrence Mishel and Julia Wolfe for the Economic Policy Institute published an extensive report. It shows that from 1978 to 2018, CEO compensation has grown 940%, in comparison to a 12% growth in a typical worker’s annual compensation during the same period.

This is troubling though. It shows that inequality is growing. Moreover, it means that economic growth is hugely benefitting only high-paid earners like CEOs, not ordinary laborers. It would benefit many if such high-paying job positions would be taxed more, or paid much less.

Texas’s economy is thriving due to the diverse career options in the southern state. Reportedly, Texas is the second-largest by GDP after California in the States. In 2019, Texas had a gross state product of $1.887 trillion, according to the Texas.gov page.

Since we’re living in a technological era with an ever-changing landscape for careers, it is clear that the job market for tech will not stop growing. With the presence of powerhouses such as Oracle and Elon Musk’s SpaceX in Austin, tech job positions should continue to be highly in-demand in Texas.

Sure, there have been changes here and there as to which profession can bring more income. Yet, it is clear that medical professionals remain one of the highest-paid professionals in the state – and not only there. 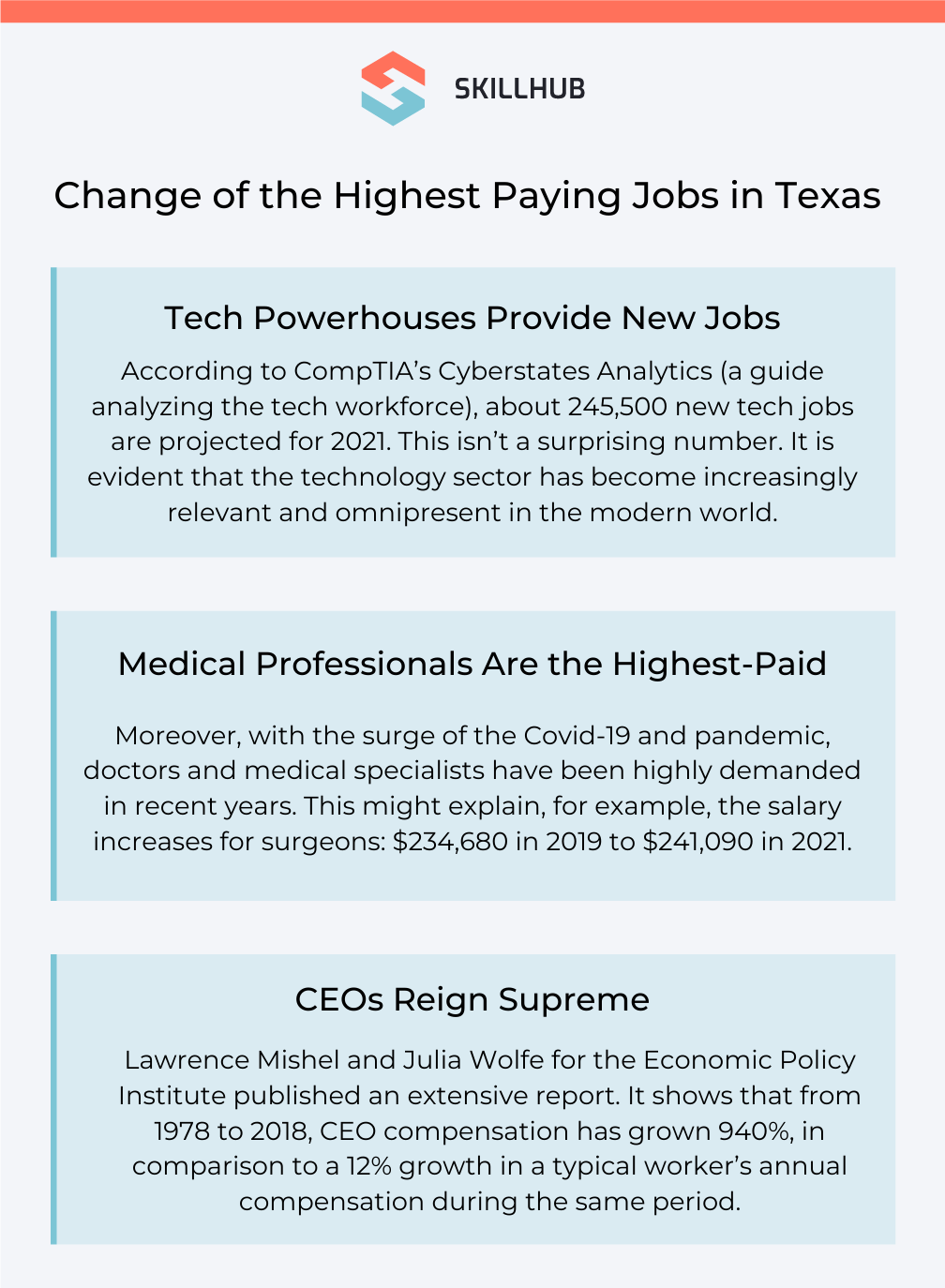