Cut the Rope HD – A Puzzle Game for iPad

Developed by Chillingo, Cut the Rope is a physics based game which uses a very simple concept but gets complicated as you complete each level. It will make you totally hooked on to it, for sure. 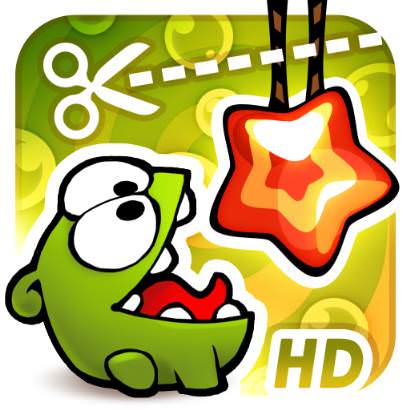 The concept of the game is to cut the rope with candy attached to it so that it gets into the mouth of Om Nom. You just have to slide your finger across the rope on the screen to cut it. Simple. But not as much so because Om Nom is not always at the same place where the candy is.

Hence, you have to use your physics skills and think logically so that when you cut the rope, the candy gets into the mouth of Om Nom. With increasing levels, the difficulty and complexity of the puzzles also increases and there are spiders, bubbles and air cushions to tackle.

All in all, it is an excellent brain training game that will totally indulge you. If you start playing it, you won’t be able to put it down until you complete all levels and reach the highest score in all of them.

Besides the concept of the game, it is the graphics and the layout that has also made it popular. Just like Angry Birds from the same publisher, Cut the Rope has brilliant graphics and sounds.

The game has a free version as well as a HD version which introduces many new exciting levels. If you start playing the game, you will definitely want to play more and get the HD version.

This game is available for both iPad and iPhone. The price for iPad app is only $1.99.

Author Bio:- Diana Armfield is a young woman who believes in the bright future of mobile gaming. She’s the kinda what we call a geek, a person who is a true fan of high tech. Diana’s spare time is fully occupied with Sudoku online and browsing the web on her favourite iPad.