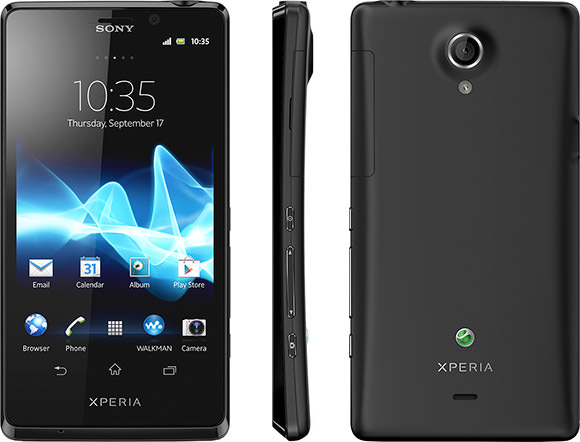 Sony Xperia T is a device designed for the young audience, however, the elders and any one from any age range can enjoy it as it is a phone for those who are searching for comfort, like comfort in carrying and functioning as well.

Sony Xperia T measures 129,4 x 67.3 x 9.35 millimetres and its weight is 139 grams including the battery. It is experienced as a light device with the thickness surpasses the 9 millimeters. The screen of Xperia T is 4.55 inches TFT panel, and is compelling high definition, since Xperia T has a highest resolution of 1280 x 720 pixels.

The Sony Xperia T has a display screen with 15 million colors depth. With the Mobile BRAVIA Engine technology, it functions via Reality Display.

There is a virtual QWERTY keyboard on the capacitive screen. There are three colors of availability i.e. white, grey and black.

As seen in the technical specifications, the Sony Xperia T works on networks GSM 850/900/1800/1900 and HSDPA 850/1900/2100. There is a swift, responsive and fast internet connection for uploading the content to Internet,loading of images in the social networks, or downloading.

With a laptop or a tablet, Wifi Hotspot feature can be used to connect to the 3 G phone connection.

Sony Xperia T has Bluetooth 2.1 with A2DP (valuable to transfer file), with the GPS Navigator and NFC Near Field Communication (contents of short-range technology is transferred). The Sony Xperia T possesses support HDMI and DLNA certification for multimedia files transfer.

As external connections, New Sony Xperia integrates a microUSB input and USB 2.0 with high speed, for transferring files. The Sony Xperia T has, finally, a slot for microSD cards up to 32 GB

The device has a camera with 13 megapixel sensor for getting highly featured photographs.

The device is facilitated with a 16 x digital zoom, Geotagging, face detector, image stabilizer, autofocus, red eye reduction and recognition of scenes. There is a LED Flash for capturing high range image results.

The internal memory of Sony Xperia T is up to 16 GB, which is quite enough for storing a lengthy succession of applications and material. This memory can be expanded through microSD memory cards. The phone has up to 1 GB of RAM with a superb performance.

The operating system of Sony Xperia T is Android, with version 4.0 Ice Cream Sandwich and in near future it can be upgraded to Android 4.1 Jelly Bean.

It can be indicated that on autonomy, the Sony Xperia T presents to market set with lithium-ion battery which has the capacity of 1,850 milliamps. According to reports, it might be available firstly in Spain then the rest of the world.

Author Bio:- I am John S Lam from Test4Prep; it gives 100% 70-466 exam . Let’s take benefit of 70-573 exam material efficiently and get guaranteed success. Check out free demo of all certifications exam.