The 8x HTC is the latest smartphone of HTC with Windows 8 as its operating system. This latest HTC smartphone model is designed to visually please the market having sleek rectangular shape with different lively colors black, blue, yellow and red. Though 8x was announced in public on September 19, this smartphone is set to be released on November. Moreover, HTC claims that this smartphone is more than to behold as its internals/specs are something to be wowed of. Here are the features: 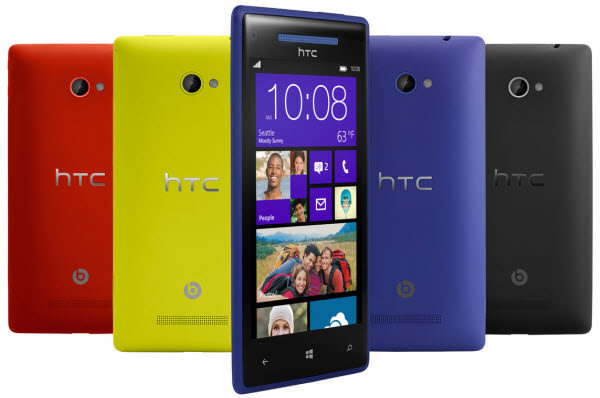 Simple design: This 4.3 inches smartphone with Super LCD 2 Display and 16G storage is eye-catching as its screen resolution is 1280 x 720p with a small port of USB for charging and connecting to the computer on its lower middle part and on its right part is where you can see the right edge is the port of micro sim, volume, and the camera button while the left edge is all with polycarbonate at the back that comes into 4 colors such as blue, black, yellow, and red. This phone is very hand and light that only weights 4.59 ounces.

Hi-powered cameras: This smartphone proudly presents its 8 megapixel main camera that can capture bigger images with 88° ultra-wide-angle and a 2.1 megapixel secondary camera. This is best for capturing photos with wide backgrounds and numerous groups of people on-screen. Plus, the video camera with a 1080 megapixels, records fine graphics and clear audio with a concentrated mono-speaker. Both cameras can be used as video recorders.

Mono-beat speaker: The speaker is powered by Beats, which is indicated at the back of the phone. Though the phone has only one speaker, this Beats enabled speaker gives finer and louder sound. But for more personalized soundtrip there is a 3.5mm audio jack for headphones.

Operating system: 8x works with 1.5 GHz and S4 dual- core processor. With a 3G and wi-fi connectivity, though not as fast as the iphone’s processor 4G, 8x offers NFC which only few smartphones do have. The RAM is only 1 GB but its internal memory is 16 GB. There is also a micro sd sim port so the phone’s memory can be expanded, though this is not really needed.