Understanding the scope and utility of Sanity testing 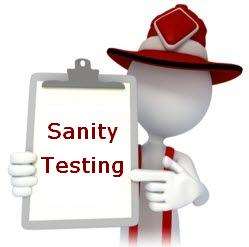 Sanity testing is performed to determine whether an application should be tested for regression. On the other side, Regression testing determines whether the old and new functionalities are working together in the approved manner or not.

Hope these points will help you to clearly understand the Regression and Sanity tests and will help to remove any confusion.

What to include in Sanity Test

To determine whether it is rational to continue with further testing we check the major functionality with advanced details in Sanity Testing. What we can include while approaching Sanity testing:

Sanity testing involves only important test cases and each test case should be stable. An application is broken down into multiple sub-modules and while performing testing of each module make certain that sanity testing should cover critical end to end flow for each module. Keep one thing in your mind when you are constructing tests cases in Sanity testing make sure they are adequate for whole application testing and also identified anticipated result.

When to go for sanity checking?

In simple and few words: Once the software is stabilized or after few releases of the product.

Sanity testing appears after the finishing of meticulous regression testing and generally, it occurs once 10 to 15 builds being published. This surface level testing is executed at the time when we got some constancy in the delivered builds. This subset of regression testing comes in the final stages of testing to check the functionality of the product is working all right or as per the expectation.

When to perform Sanity Testing

In the process of multiple testing loops, sanity testing is performed during the later stages of testing cycles after through regression cycles. After any changes in the code or after any minor repair to fix any critical issue, or any kind of functional changes, for example, adding extra features, removing existing functionalities or Bug fixes, Sanity test suite is executed. We also perform sanity testing to check the build potency and to verify the decisive functionalities are not wrecked before running the extensive regression test set. Sanity testing process involves the execution of some of the test cases from Regression test suite to determine whether changes have created any negative impact on the functionality of the application. Sanity testing is followed by Full Regression testing if there is no issue.

To get the better product with minimum defects or bugs make sure your every member of the testing team must possess some mandatory and highly technical skills. He/she must have good experience in System Testing, Regression Testing, Smoke and Sanity Testing, Writing the test scripts with Input criteria and exit criteria’s, experience in executing the Test Script and documenting actual results through clarity in defect history maintenance such as defect classification, Tracking, detailed definition, grouping and summarizing and reporting etc.

It saves time and efforts and also unambiguous the decisions to end testing if it cannot pass through even the sanity testing. Sanity testing is mainly focused on new functionality or change and its impacts. Sanity is non-scripted and can perform quickly on the application.

About Author: Sangram is a tech enthusiast, presently working as a Content Expert with Crestech software systems. Tech blogging is his passion, through which he intends to explore the world of software Testing. He doesn’t just write for tech-savvy people, but also for those who find the world of technology intriguing.