Nook vs. Kindle- Which is better for Your Child

The Nook, launched first in November 2009, is an e-book reader developed by Barnes & Noble, a book retailing company from America. The first model launched had Wi-Fi connection and an AT&T 3G wireless connectivity. It had a six inch E Ink display and a smaller second screen which served as an input device. Subsequently several other devices has been launched by the company. These include the Nook Color, released in November 2010, the Nook Simple Touch in June 2011. In November 2011 and February 2012 the 16GB and 8GB versions of the Nook tablets were launched. 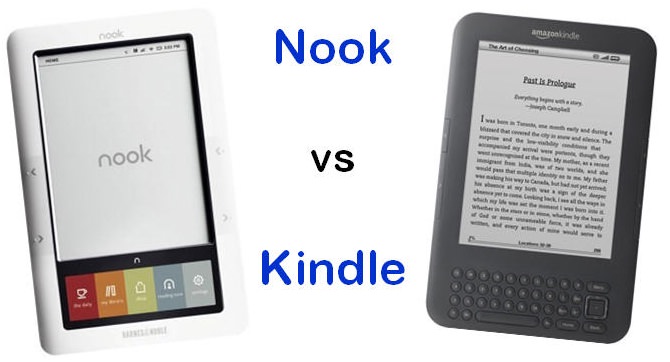 The Amazon Kindle has now reached its fourth generation. It is also an e-book reader developed by Amazon. It uses an E Ink electronic display which can render about 16 shades of grey to imitate the feeling of reading on paper.

The obvious comparison between the Nook and the Kindle would bring forth a few questions. At first a user has to decide whether he wants an E Ink screen or a touch screen. For the reader who wants to read a novel on these devices, an E Ink screen will be a better option. It reduces eye strain and gives paper like feel.

As far as E Ink readers are concerned, an obvious comparison between the Nook Simple Touch and the Kindle Touch comes to the forth. The features are almost the same, though a closer look will reveal a bit more.

Now let’s see the comparison between the latest color touch models of Nook and Kindle, the Nook Color and the Kindle Fire. Here also, both the models run neck to neck for supremacy. The facets of both the devices will be evaluated on the basis of the following points –

Besides these aspects, the Nook Color also provides its users with a wide variety of publications, like newspapers and magazines. Nook is also, all set to revolutionize children’s literature. Barnes & Noble have made a huge collection of Children’s books available on the Nook Color, which are interactive to the touch! Thus, parents would surely prefer the Nook device over the Kindle, as far as their children are concerned!