The sound of a whistle isn’t the only ‘tweet’ you’ll hear from a police officer these days. More and more law enforcement agencies are discovering the advantages of using social media such as Facebook, YouTube, and yes, even Twitter, to keep the public safe. Services such as real-time updates and anonymous tipping encourage interaction between the police and the community. Here are some of the ways in which law enforcement agencies are using social media to protect you. 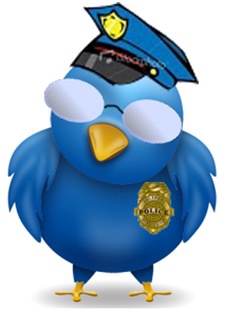 A police blotter keeps a record of events at a police station, and can traditionally be found in the form of a paper register at a sergeant’s desk. Now many police blotters can be found on blogs, Twitter feeds, and Facebook wall posts, which provide real-time record. Police officers can report directly from the scene of a crime, which gets the information to the department, journalists, and the public faster than ever before.

Due to the amount of traffic social networking sites receive on a daily basis, police have begun to post pictures and descriptions of wanted criminals in hopes that the information gets to as many people as possible. For example, a police department may post the headline,

along with a photo from the ATM surveillance camera at the time of the crime.

There are a number of ways in which citizens can provide anonymous tips to the police through the internet. Many police departments now have a direct link on their website where users can post a tip anonymously. A program called tip411 developed by CitizenObserver is marketed to law enforcement agencies as a web-based notification tool that allows users to send tips in a variety of ways including web chat, texting, and secure social media publishing.

Police can now search the web for certain keywords and phrases as they appear in real-time on posts in various social media outlets.Police departments know that they must be careful when performing these types of searches, as they could infringe on the public’s right to privacy. In general, they will only pay attention to posts that signal something could be wrong, such as “Why is everyone running around Market Square – is something happening?” Monitoring patterns in these types of posts can act as an early warning system for the police.

Social media sites are very popular among gangs, and law enforcement officials were quick to realize this and take action. Investigators pose as gang members online by building phony profiles online, ‘friending’ gang members, and gaining trust through online interaction. Over time, they get their ‘friends’ to share details about gang activity, which often helps police connect the games to crimes and make arrests.

Many police departments are now taking advantage of the capabilities of Twitter. Some use it to inform the public and the local media about ongoing situations. This has proven especially useful when it comes to traffic safety updates and potentially dangerous situations like wildfires.