Will the Amazon Drone Change the Online Shopping Industry?

Jeff Bezos has done it again!

The quintessentially creative guy and the founder of Amazon unveil a revolutionary idea – the use drones to drop customer orders at their doorstep!

Disclosed between Black Friday and Cyber Monday events, the flagship prototype named as Amazon Prime Air (the advertised video) is estimated to become a part of Amazon business model from 2015 in the US and by 2016 in the European air space. According to Bezos, the unmanned aerial vehicle (UAV) will be able to carry about 5 pounds of weight, operate within a 10-mile radius of Amazon fulfillment centers and encompass almost 86% of the total of Amazon shipments. 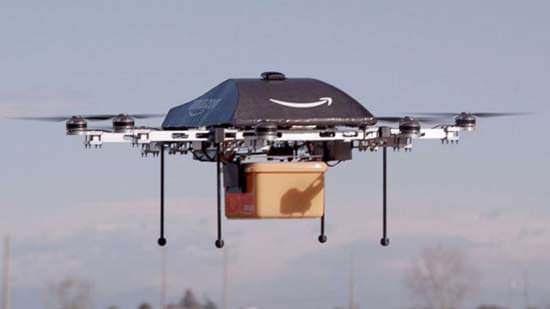 Evidently, the online shopping industry is quite abuzz with this recent development. If the concept is actualized, it could put the eCommerce industry under much pressure.

Here are some relevant concerns.

Like Wal-Mart, Amazon employs thousands of works and obviously, a considerable percentage of the workers are order delivery employees, a position likely to become largely redundant after the UAV starts to play an active role.

The result, once again, will be joblessness. It is not idealistically possible to absorb the redundant workforce into any other department. Maybe a certain number of people will be eligible but what about the others?

Till now, the drones were used in war and surveillance, and its involvement in eCommerce is unavoidable. The use of UAV delivery model will not only replace humans but also reduce the cost of labor, shooting up the profit margin of the company. Truly, the idea is revolutionary and Amazon once again proves it is a technology company trying to scale itself up against other eCommerce competitors by devising new ways to sell and deliver physical products. The concept is unique; however, does it merit the impending joblessness?

This is another grave concern. The UAV’s will store user data. Seeing the ever increasing demand for consumer data and a spurt in unethical hacking, it is but a timed bomb waiting for someone to plug in the right code and steal away all the consumer data.

Of course, Amazon is involved in building a lot of technology and certainly, they won’t leave the Amazon Prime Air drones will security loopholes. But, the speed with hackers and unethical data miners are innovating their skills and technology, it is bound to raise serious security concerns in the near future.

The members of US bureaucracy are uncertain of its repercussions. There are already talks of proposing a drone privacy bill. Senator Edward J .Markey says: “Before drones start delivering packages, we need the FAA to deliver privacy protections for the American public”. Another Senate member, Ted Poe aptly summarizes the rising concern over privacy. He says: “Think of how many drones could soon be flying around the sky. Here a drone, there a drone, everywhere a drone in the United States…The issue of concern, Mr. Speaker, is surveillance, not the delivery of packages. That includes surveillance of someone’s backyard, snooping around with a drone, checking out a person’s patio to see if that individual needs new patio furniture from the company”.

These two are primary factors that Amazon needs to reconsider. From a stricter eCommerce business perspective, major online retailers are going to have a tough time competing with Amazon because once this is launched; the company will be miles ahead of others!

Sanjeev Kumar is a technology blogger and social media enthusiast, he works for IndanCoupons.com – a site that helps to save money while shopping online in India. Follow him on Twitter and Google +