The iPad 3 is Coming: What should you expect?

Life doesn’t stop… and neither does Apple, Inc. As such, more than one year past the release of the much-acclaimed iPad 2, we all know that it’s a matter of time before the 3rd iteration of this iconic device sees the light of day.

Most analysts seem to agree the new model will be released before the end of 2011, most likely by early Fall. In case you’ve been wondering just how the technological giant will improve on its sexy tablet, then you have just found the right website!

After a bit of running through the rumor mills around the Internet, and sprinkling some of our own hopes and predictions, we have created this post. So, without further due, let’s see… 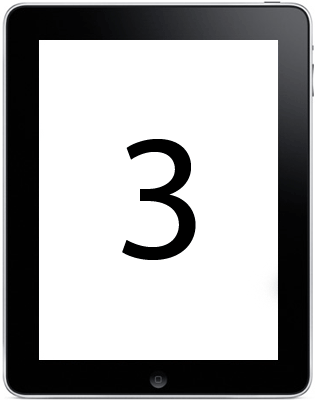 What Apple may have in store for the iPad 3

Camera flash: the second iPad clearly improved on obvious shortcomings of the original tablet by including not one, but two cameras. This neat feature allows using the device for FaceTime as well as for doing a bit of photography. However, one of the main improvements that people hope to see in the new model is a built-in flash on the external camera. That would allow for much better picture quality, not to mention that users wouldn’t be limited to taking pictures during day time. As bonus, the flash could double as a make-shift flashlight.

SD card slot: since the first iteration of the iPad, the lack of storage space expansion has caused many potential buyers to sit in the fence, waiting for something that would allow more versatility in terms of file storage. This is something that may very well be fixed in the new model… or at least it should! Since Apple is the kind of company that pays attention to customer feedback, it shouldn’t be surprising if the iPad 3 includes a micro SD card reader.

Extended battery life:  From its inception, the iPad has sported a rather impressive autonomy, bordering 10-12 hours. However, there are now more potent batteries available on the market… so you shouldn’t be surprised if you realize the new iPad will actually run longer than a full day with a single charge. This would be a feature that would convince many people who already own a tablet to upgrade, since let’s face it… these devices are pretty handy while you’re out and about.

Improved form factor/ side-to-side screen:  As rumor goes, Apple has been working on new borderless screens, which would arguably meant to be introduced in the new iPhone 5 and iPad 3. Besides looking rather stylish, this type of screen would allow for an improved form factor, meaning the screen would be noticeably larger, while the device itself would stay the same size (or even smaller, since that’s a common pattern with new devices from Apple).

Retina display/ glasses-free 3d display: The second iPad was actually meant to sport the new retina display which premiered in the iPhone 4; it didn’t happen at the time, arguably due to technological constraints. But this time around it will surely be one of the new features; in fact, we suspect that a screen with such high resolution might even be adapted to work as a 3D display. One of the neat perks that would be available from an iPad 3D (besides the obvious feature), would be the possibility that two people facing the screen from opposite sides might be both be able to see thescreen image right-side-up, courtesy of the reticular screen, which would be able to send two different images in two different directions. Wouldn’t that be handy?

That’s it! Let us know what you think of these predictions, and make sure to include your own when you post a comment from the comments box down there.

Author Bio:- This guest post was written by Pedro C., who runs this Slice of Life blog that you should visit to learn about all kinds of trivia, lifestyle oddities and even tech recommendations such as this dut turbo review.